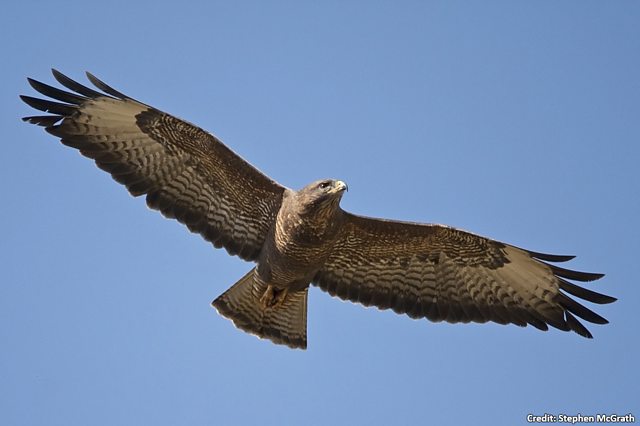 Thinking About – The Hunter and the Hunted When I’m out walking there is a sound that I love to hear. It is a sound that was absent in Sussex for many years, and it is the call of the buzzard. Not too long ago I had to get in my car and head west to see one. They would normally begin to appear around the New Forest, but to see a lot of them you really needed to go all the way to Devon and Cornwall. An area that was the buzzards’ sanctuary. I remember saying to myself, “When the buzzards return to Sussex, that will be a great day”. And then I began to see them. At first heading up from the west, but then their numbers began to radically increase, and now they are quite a common sight.

I heard that call yesterday whilst out walking Oscar.

I stopped walking and looked to the skies, and there I saw that majestic bird, but instead of flying alone, it was being dive-bombed by rooks. It got me thinking about the relationship some of us Pagans have with animals and birds who are hunters. The sight and sound of a buzzard makes my heart sing, but not so for the rabbit, mouse, or the vole. If, when I walked through a British woodland, I actually had the chance to become the dinner for a wolf, would I still have that same feeling when I saw one?

I absolutely get the respect of power and grace. When I finally allowed a tarantula to walk on my arm and hands (I’m very arachnophobic) I suddenly understood that the root of my phobia lay in the awe of spiders, and what they do. Like some memory in my DNA that understood that spiders, along with snakes, should be avoided for my own safety. That a bite from one of these creatures (not necessarily the tarantula, but one of its cousins) could cause me severe pain, injury, and possibly death.

It’s all still in there.

That ingrained fear doesn’t extend to the wolf anymore, because they no longer prowl the forests of Albion. But put me into an area of land where the danger was real, and soon I would react differently. I’m sure there are those of you reading this who live in areas where the bear or wolf still run wild, and I’d love to read about how you relate to these animals on a spiritual level. Sometimes I can’t help but fall into that trap that suggests I am somehow an observer of nature, and not a part of it. One of the things that reminds me I am just a part of it all is the feeling that I am not the top of the food chain. I get that in Australia when I go there. It’s very primal, and somewhere inside that hunter gatherer, who risked life to bring food to the tribe, is still within me, buried extremely deep, but still there. When I see the rooks dive-bombing the buzzard I understand that. I as a human I can watch, but to the rook the buzzard is a real threat that needs to be dealt with for survival.

Many of us have discovered the spirit of an animal that walks with us, and for many these are hunters. Do these spiritual animal guides help bridge that gap between the sterility of modern day life and the hunter-gatherer that lies within those deeper recesses of our brains, and instincts. I think they do. My animal is a herbivore, but when I go to see the rut in Autumn, and hear the call of the stags echoing through the landscape, the clash of antlers, the “yes I do look bloody awesome with my full Antlered Crown don’t I?” attitude of the stag, I feel that same primal power.

Living in built up towns hearing the call of the buzzard whilst out walking is a reminder that I am not only surrounded by nature, but a true part of it, and with that recognition comes responsibility, and relationship.

13 responses to “Thinking About – The Hunter and the Hunted”