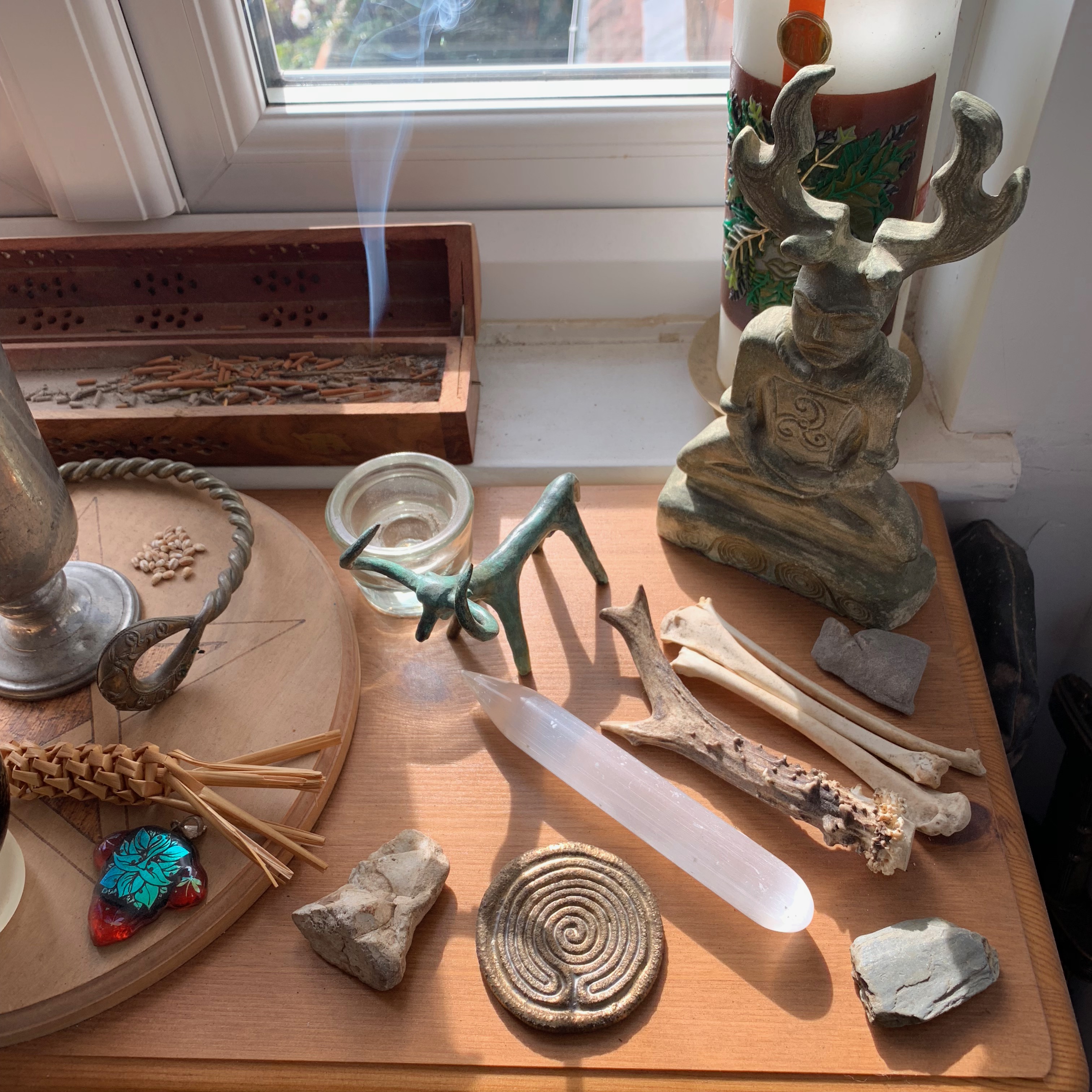 Thinking About – Samhain, Bones and the Ancestors

I still find it amazing how quickly after the Autumn Equinox the season takes hold. Maybe it’s the angle of the Sun to the Earth but the shade of light blends with a touch of gold, whereas the Summer sunshine, to my eyes at least, sparkles with silver, and with that change in light the leaves turn also. There is still a lot of green across the Sussex countryside, but the red of the abundant Haws, and the yellowing leaves of the Horse-chestnut is now colouring the forests and Downs, painting a watercolour only Nature Herself can create. With those colours, and earlier evenings, my thoughts begin to turn to Samhain, as the rooks call outside my window.

Just as the turning tide of the waxing and waning Moon shows us the changing aspects of Magic, so the seasons reflect that also. The year is waning and, as the waning Moon opens us to reflect and consider, so too does the waning year. Of course life goes on as it always does, but if we are in tune with the cycles of Sun and Moon we can step beyond the Human constructs of commerce, entertainment, do-do-do and keep doing, don’t stop, be proactive, post that photo, make that Tweet, never stop, and be still. It’s a wonderful feeling. To notice the change in light, the Autumn colours, and step in tune, slow down, really observe. It can feel like you’re in one of those freeze-frame images, where you are in perfect focus, whilst the rest are a blur of activity.

Although I love the Summer, I also love the Autumn, and this opportunity to take stock, look back, reflect, and open to the new possibilities of next Spring. But I know that by mid-January, I’m done with reflecting. I want to put things in motion, get going again, and maybe that’s why my relationship with the Winter is a little strained. I’m not sure that the seeds of my creativity need ‘over-wintering’. They don’t need a frost to germinate, but they have to get one anyway. But now isn’t the time to think of Spring, nor Winter, it’s time to be present, right now, and enjoy the perceptible wind-down.

Autumn and Samhain also bring with them a very deep, Earthy magic. Yesterday I put together this month’s episode of DruidCast. It won’t go live until the 20th, but I like to have the show ready nice and early. This month there is a talk given at this year’s AnderidaFest by the author and Witch Gemma Gary. I introduce her by saying that “there are those who would like a Wicca that can happily sit and have tea and cucumber sandwiches with the local vicar. This talk isn’t like that”. And it’s the perfect Talky Bit for this time of year, as we approach Samhain. Gemma’s talk is on the ritual use of human and animal bones, in Witchcraft, and in Folklore. As I put the show together I wondered how many Druids and Pagans still have animal bones on their altars. I do. Bones have always been a part of my Path, particularly when it comes to Magic.

I’ll give you an example. During a very difficult part of my life I asked for the help of an animal. This help came in the form of Seagull. The freedom they show when they fly, their survivor attitude, was inspiring, and helped me deeply. As I went for a walk one day on the local beach I found the body of a Gull. I knelt and asked the Spirit of this bird if it would be ok if I took its mortal remains. I got clear approval. So I took it home, and buried it in the garden near an ants nest. Some days later I got out a trowel, and dug up the remains. The ants had done their job. Very little flesh remained. The skull was perfect, and I took the wing bones, and put them in my travel guitar case. I have always been a nervous flyer, and so I asked these bones to bless my guitar, to keep it safe when we flew off to distant countries.

But there was a problem with this…

As we came into Australia one year I was pulled over by customs and asked to open my bags. Of course everything would be fine. I opened my bags, they had a rummage, all good. Then I opened my guitar case. There were the wing bones.

“What are these?” asked the customs official.

“Why do you have bird wing bones in your guitar case,” she asked,

“You do know it’s illegal to bring animal remains into this country?” she said.

She looked at her colleague. Between them they agreed that four Seagull wing bones didn’t constitute animal smuggling, and they let me pass through, but I still remember the looks on their faces – they obviously thought me very weird, very weird indeed. When I got home after the tour I took the bones out of my guitar case. I put them on my altar, and they’ve been there ever since. Now before I fly I close my eyes, place my hands on the bones, and ask that my guitar be safe.

I love bones, but respect is the key. I guess some would say that leaving the bones alone is more respectful. Well, that entirely depends on your own worldview, and if that’s you, I respect that, but it’s not how I work. If there is a powerful calling, I’ll listen, and follow where it leads, and if it leads to bringing home a victim of roadkill, then so be it. I look at other cultures (maybe you too saw the recent documentary with Grayson Perry where he looked at other cultures and their rituals around life and death) and see how some still have deep relationships with the remains of the dead, I totally get that. We are so shielded from death. The body is taken away, cleaned up, maybe filled with horrendous preserving chemicals, then the next time we ‘see’ it it’s in a box ready to go in the ground. I’m not at all sure our relationship with death is healthy, but it does explain why so many are squeamish when it comes to remains. I’d love to leave my skull for my family. I’m not sure they’d like it, but I wouldn’t be shocked or appalled if one of my sons asked if they could have a finger bone, or some other part of me, after I’d gone. I get that type of connection.

Maybe that reads as a little odd, but I don’t think it is. Go back far enough and our ancestors here on this island would place the body of the deceased in a passage grave (sometimes after stripping the bones of the flesh), and then every year they would be taken out once more. We don’t entirely know why, but it must have been an honouring, a remembrance, a connection with the ancestors. I have no problem with that idea at all, in fact I think its lovely. But then I want a sky burial when I go, and as far as I’m aware that isn’t an option for me. It’s either go in the ground, or up in smoke, neither of which appeal. There’s good protein on this body of mine. Give me to the birds and animals. The Gods know I’ve eaten enough of their kin in my lifetime. Then collect my bones and do with them what you wish.

And this is not just a Pagan thing. Consider the countless Christian reliquaries around that are venerated as the containers of the bones from Saints. The veneration of bones runs deep.

Our ancestors understood the power and connection of bones. Our turning Wheel of the Year, and the cycle of the Moon reflect life, death, and rebirth. Folklore is littered with tales and customs of using bones in magic. Is the honouring of bones a part of your practice? If so, what do you do?

8 responses to “Thinking About – Samhain, Bones and the Ancestors”