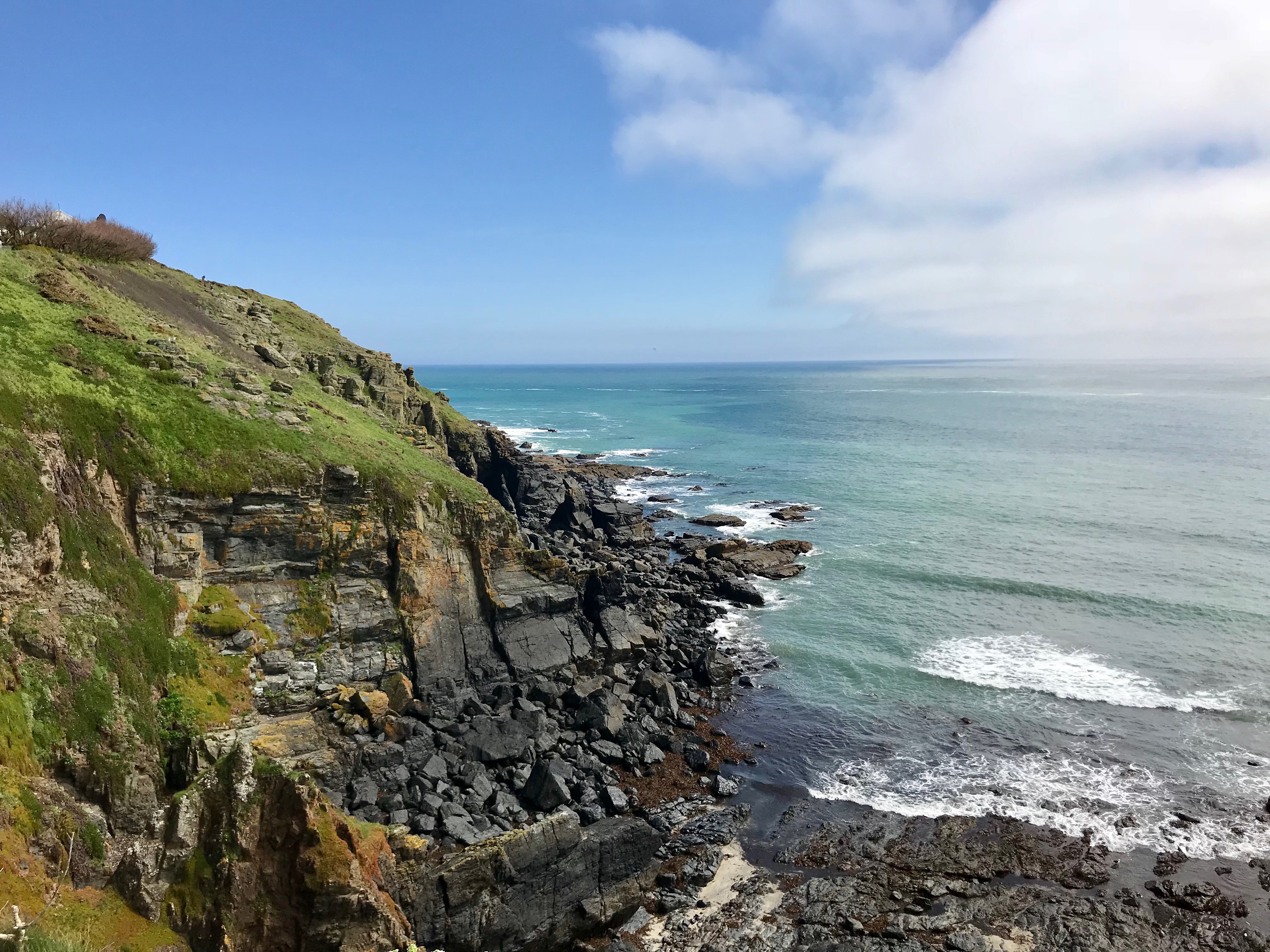 The blog fell quiet last week. Me and Cerri went on our first holiday, an actually holiday, for three years. The 10 days started with a trip north for a weekend exploring the ancient Bull’s Hide Trance, a ritual we have written down from various sources. It was a great weekend and I think it needs an article of its own, so I’ll leave that there for now.

On Monday morning we arrived in Cornwall where we would spend the week. We had hired a wonderful self-catering cottage overlooking the river Fowey, in a tiny hamlet called Golant. What an amazing space and view. Watching the tide go in and out, and the call of the birds was a delight for the senses. The owners had asked when we thought we would arrive and when we got there we found out why – there was a lovely Cornish Cream Tea waiting for us on the balcony. The first day was wet, so we just spent that in the cottage, chilling out. But the next day the heatwave hit and we were off! Albion had been so cold and grey and the change was so sudden it was as if we’d climbed onto a plane in the grey, and got off on some Caribbean island. This Sun worshipper could not have been happier, although we had taken no hats, nor sun cream… But up we got and off to the Eden Project we went. The Eden Project is an amazing place with a wonderful back story. The St. Austell area of Cornwall was a very industrial place some years ago, and quarries are still visible across the landscape. So in 1995 the person who was responsible for the restoration of the nearby Lost Gardens of Heligan needed something new to focus on. A huge china clay quarry was nearing the end of its financial viability and often these spaces are simply abandoned, leaving huge scars upon the land. So Tim Smit turned his gaze towards this space with the dream for it to host some of the most important plants from around the world. Doors opened after a vast amount of work in 2002, and I think my first and only visit was about 2003, so it was very new and wasn’t quite established. It was amazing then, but now, some 15 years on, and it feels like it has come to fruition. Much had changed, and the huge Biomes were incredible. One exhibit I am so pleased is still there is a tribute to Bacchus, Dionysus, the God of the Vines. I could spend hours in front of it, and the power seriously tempts you to grab a bottle and join in! During the Bull’s Hide Trance one of the visions I received was an eye of what I thought was a canine. But as I looked at this vibrant display I realised it wasn’t canine at all, but the eye of a Bull. Maybe Baccus is calling me to work with him, or Mithras. We shall see where that leads…

A tipple of a different kind caught me eye in the Eden Project shop… Well, when in Cornwall. I had to try it, and can report, it is lovely. Just the slightest hint of cream in the finish. After Eden it was time for a visit to our first fishing village. The sun was still high and warm so Mevagissey was calling.

I had some things that I needed to do this holiday most of which revolved around food. So the Cornish Cream Tea was already ticked, and next the Cornish Pasty by the harbour, listening to the crashing of the sea against the cliffs. Thank you Mevagissey for supplying both! The end to a perfect day.

Other highlights for me?

Seeing an Atlantic Seal off the coast of Lizard Point, the southern-most tip of the Island of Albion. Luckily this was one day I had brought my binoculars and, with a little bit of fiddling about, I managed to catch this photo on the iPhone, through the binocular lens. Such magical animals. The Lizard has within its bones a particularly beautiful stone called Serpentine. Some say that is how it got its name, whilst others say it is a fisherman’s tale that when out to sea and looking back to land, the coast of the Lizard looks like, well, a lizard. Maybe both stories are true. Either way it’s a blessing that the commercialism that consumed Land’s End (I remember as a child only being rocks and sea there too) hasn’t appeared here. There is a shed containing work from local artists, and two fairly old cafes. The seal photo was taken when at one of those, sitting and eating, ok, I confess, another Pasty. And the Lizard Point is better for being left alone, as you can see in this shot. The roundest stone circle on the island was way down beyond Penzance and, again, I hadn’t been there for many years, so a visit to the Merry Maidens was very much on the cards. For much of our visit we had the stones to ourselves. Peace, magic, a communion with the ancestors. I know that thousands of people go to Stonehenge for the Summer Solstice each year, but that huge party has never appealed to me. In fact I feel more at these smaller circles than I do within the Giant’s Dance, wonderful though it is. And finally the beautiful Mullion Cove, another harbour on the Lizard peninsula. For years this little place was my favourite spot on the planet. You could lay there, high above the crashing waves, and listen to the call of the hundreds of gulls that lived on the rock out to sea. And sometimes, just sometimes, those calls seem to change into the sound of children playing in the playground. The harbour is still just as beautiful, and here I ticked another Cornish culinary delight off from my list. A Cornish ice cream cone, with a nice dollop of Cornish Clotted Cream on top. Oh man. Where they meet the cream goes hard, and, well, you have to just try it to understand… As I stood on the balcony of that little cottage on the last night, and watched as the sun set, and the river Fowey rolled in from the sea, I realised something. I was born in Cornwall. My bones and teeth were made from the food and water of that place, but my parents moved us away when I was very young, so I’ve lived most of my life in Sussex. But for years I never felt at home here. I was a child of Granite and Moor, and the gentleness of Sussex was, well, to pretty and gentle. But some years ago I found out that, on my Father’s side, our family have lived in Sussex for centuries. I have an ancestor buried in Portslade cemetery from the 1700s, which is about a mile from where I’m sitting right now. My ancestry is Sussex. When I learned that I thought I’d managed to get Cornwall out of my system. But as I watched the river, listened as the owls began to hoot, and the sun set, suddenly the air became crisp and chill, it smelled earthy, and sweet, a smell that took me right back to my childhood, and I began to cry, because I will never be someone with just one home. I will always and forever have two. When I leave this body it will be laid in the earth of Sussex, with my ancestors, but my Druid robe, that I have asked Cerri to burn, and to take the ashes of that sacred garment and scatter in on the headland of Cornwall.

But I hope that won’t be for a long time yet.