A couple of months ago I set up a Facebook page for a concert at the Royal Albert Hall. The idea came as I looked at the 7500+ likes on the my music page and thought I wonder if we could do this? So I created the Facebook page asking people to like the page if they would come along. The page got over 800 likes on the first couple of days, then levelled out as I updated it less and it now stands at just over 1000 likes. Which is a good start, but we still need more if the idea is to become a reality.

Obviously the first thing that happened, and I’m not at all surprised it did, is that I was inundated with offers from musicians to play at the gig. There were a few other enquiries that came up so I thought I’d better address some of them in this post so we know we are on the same page.

The main thing to bear in mind is that we would only have the hall for the evening. It wouldn’t be an all day festival. Just to have the hall for 3 hours of music between 8pm and 11pm is going to cost around £28-30,000. Doors would open at 7.15 with access to seats at 7.30. The concert would begin at 8pm. So realistically there is time for one, at the most two, performers on top of my own concert for you all. Right now I have been speaking with Spiral Dance from Australia in the hope that they will be one of the bands performing on the night, but this is obviously in the very early stages. As for myself, I’ll be putting together a full band for this one-off concert with some very special guest musicians along the way. Whatever happens it’s going to be a great evening of music.

So the next stage is to begin to raise the finances for the concert as the Royal Albert Hall requires all of the money in advance for people hiring it for the first time. Here’s the plan…

I would like for the Facebook page to get to at least 1500 likes before Samhain this year. The Albert Hall holds 3929 people, so if each of those 1500 likes brings one guest we are close to a sell out. If we reach 1500 likes on the page I’ll then take that as a good omen and open a Kickstarter fund raiser page. Kickstarter is a safe and secure online service that allows people to raise money for artistic projects. I will set the target figure to £28,000 and ask each of you who want to be at the event to donate a minimum of £30. That £30 donation will buy you your ticket, but at the time of donation you won’t know the date of the event as I won’t be able to book the hall before we raise the money. Kickstarter only charge the donation if the project reaches its target by the deadline. If we don’t reach the target by the deadline no one will be charged and the project just doesn’t happen. If, however, we reach the target, or go beyond it, on the deadline date the donations are taken, we get the finances, and can write the Albert Hall a cheque and book the date for the concert. So the success of this event lies with the community. If we want this to happen, it will. I’d love the concert to happen next year. So if the Kickstarter fundraiser page goes live this Samhain, and we set the deadline for, maybe, Imbolc 2013, we can then look at the second half of the year for the concert itself.

How exciting would that be!! Imagine the Royal Albert Hall heaving with your friends and people you’ve yet to meet, all gathering to celebrate together and be entertained. Even if I wasn’t playing I’d want to be there. To have come from the early 90’s newspaper slandering to a concert at the Royal Albert Hall would really show just how much our community has grown. So I ask you to tell your friends, talk about this at your moots, in your magazines, on your Facebook groups, in your podcasts. Share the Facebook page and let us see if together we can do this.

Obviously none of this is written in stone and things can change, but If you’ve any questions. Do ask them! 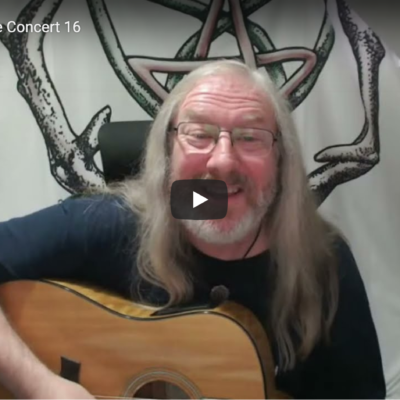 Hello again my friends! Here is House Concert 15 and this one is a little different. I know that many of you love my 'The Cauldron Born' album, so this
Read More

14 responses to “Update on the Royal Albert Hall concert”