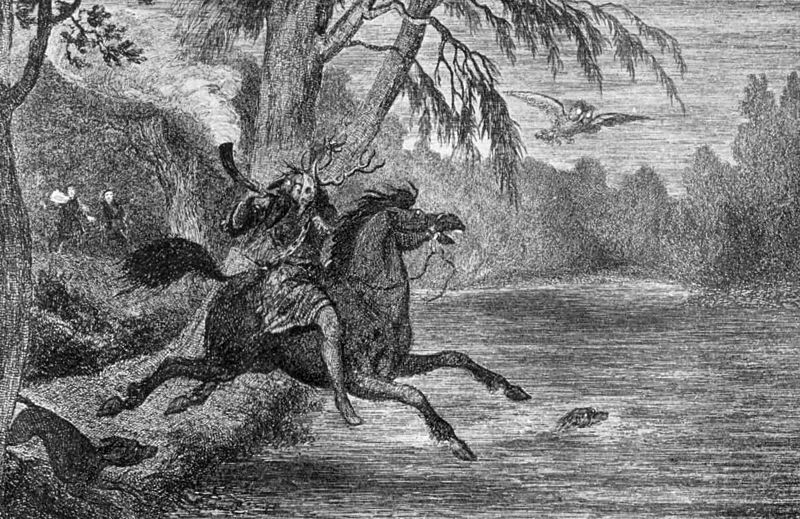 Over the years I’ve had many discussions with friends and seen quite a few talks about the nature of the Gods. One of these is the idea of local deities. For instance in a recent edition of the Down at the Crossroads podcast (thoroughly recommended if you’ve not heard it) Chris and his guests discussed Herne. If we look at the story of Herne the Hunter we will inevitably be led to a large forest in the Windsor Estate. This is where the story of Herne originates. I know, I know, back in the 80s and the Robin of Sherwood series Herne was in Sherwood Forest, but that is not the root of the story. So how did this local story of a hunter go from this to a worldwide revered horned deity?

I’m no historian. I’m a Bard. I love the mystery, the art, the stories, and the poetry. I love the places those words and images take me, so I’m not going to write about historical fact, because that, however interesting, is never the full story. It’s interesting to historians but Herne’s tale, if approached by an anthropologist for instance, or a poet, or an art historian, or a philosopher, will always explore other avenues than the historical ‘truth’. These approaches don’t just look at a local story, they look at the results of that story, and why it has had such an effect. What is it that this story contained that has answered an inner call from humans and made it the centre of TV programs, a Shakespearian play, legends, books, and Paganism?

If we are truly honest every worldwide religion began in a very small localised area and spread out from there. They also began with stories. So the tale of Herne spreading from Windsor, out through Britain, and then on with migration into the New World is no surprise. It’s the same with the spread of Odin, as the Norse settled in new areas, so they brought their Gods with them. Odin came from the ice cold of the North, through Europe, and settled in Orkney, Yorkshire and many other places. As Woden he came into East Anglia, Sussex, and further down into Wessex. Isis spread far and wide, far away from her home on the banks of the mighty Nile. The tales of Arthur can be found from Britain to Brittany, pulled along with the migration of storytellers. So it’s obvious to me that Gods spread and travel with people.

So the Gods begin on a very localised piece of land. Sometimes they stay there, more often than not they move with their followers, sometimes that origin location becomes a pilgrimage site that leads those from other countries back to where their Paths began. Mecca, Jerusalem, Bala Lake, Tintagel, and many other places have become locations that draw followers back in droves. Living in other countries, maybe knowing their blood ancestors came from Scotland, Ireland, Wales, England, India, Saudi Arabia, wherever, they have been called to follow an ancestral path in a land far from the origin of their story, so eventually there is the call to reconnect and make the journey.

If I moved to the middle east I find it highly unlikely that I would convert to Islam, Judaism or Christianity. I would take my Gods with me. See, for me there is a bigger picture too. I realise that the tales of my Gods began on a small island off the coast of mainland Europe. I find myself closest to them here but when I go overseas to play gigs I don’t leave them behind. That’s crazy. Cerridwen began on the shores of Lake Bala, that’s true. But her spirit, her presence, is a part of the Universe. How small is that little lake in comparison to Albion? How small is Albion when included with Europe? How small is Europe when compared to the Earth? And the Earth is tiny when we place it in our Galaxy, and then our Galaxy pales into almost insignificance the we consider the billions of other Galaxies in the Universe. If my Goddess is tied to a tiny lake in Wales, yet there is all of that out there, then what’s the point? Her energy, her spirit, my spirit, is a part of that infinite universe. Her story, Herne’s story, Jesus’s story, Mohammad’s story, our stories, are a part of that too. To me that’s what it’s all about.

A few years back a men’s group I am involved with made a pilgrimage to Windsor forest. We held a ritual there, beside a huge Oak tree. Herne’s Oak fell many years ago. It was a massive, old tree, and many of the oaks within the forest are doubtlessly it’s descendants. It was a powerful day and you can read about it here. It think back to it fondly and would love to make the pilgrimage again this Summer, back to Herne’s forest. But here’s a thing. When I am within the woods of Pennsylvania, or in the Bush of Australia, I still feel Herne there. He is a part of the tree itself. I see him in the eye of the kangaroo, and in the eye of the white-tailed deer. It’s beyond location. I hope that all makes sense. It’s not The Truth, it’s a feeling, a connection with the Natural World, both here and way out there. It’s what these stories teach, and that teaching reaches way beyond the origin of the tale.

11 responses to “Thinking About – Travelling Gods”