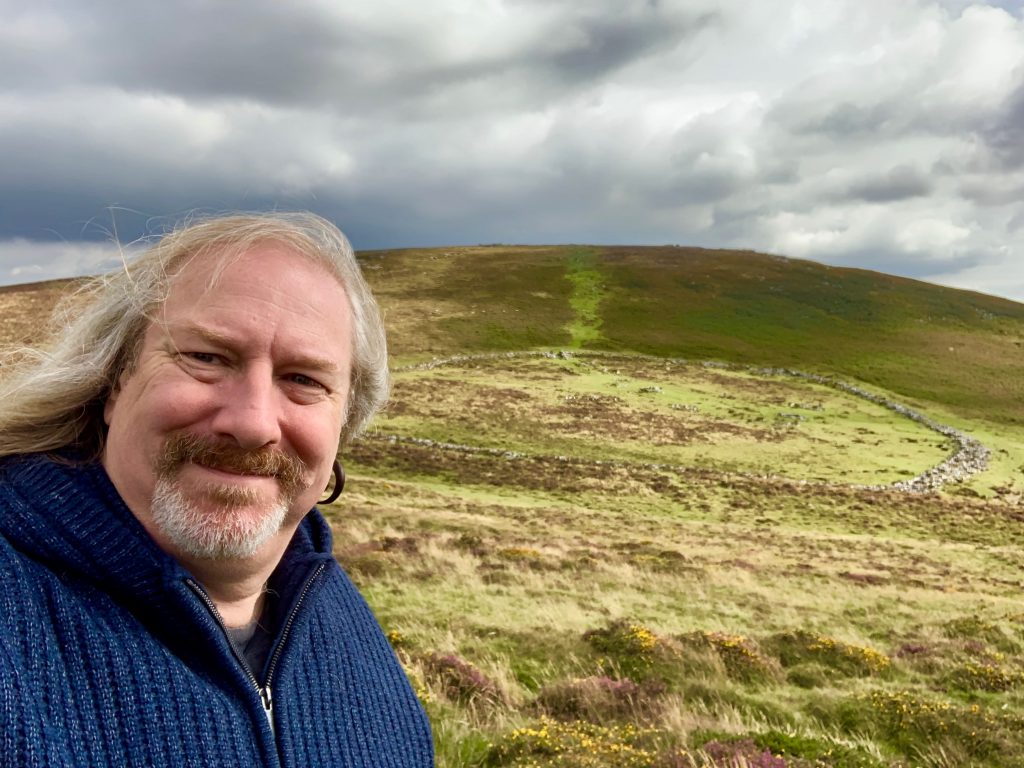 Damh the Bard (born Dave Smith) was obsessed by music from a very tender age. Regularly found by his parents singing at the top of his voice on his rocking horse to John Denver and Ralph McTell it soon became apparent what his life-long goals would be. He got his first guitar aged 8 years old, and was taught Irish folk by his teacher, a multi-instrumentalist Irishman by the name of Tim O’Leary. Dave played his first live concerts at the age of 11 in pubs on the Isle of Wight, and took his guitar to school at every opportunity to entertain his classmates. During his teens he played in several rock bands, one of which, Targa, played regularly on the London circuit, finally getting their own headlining concert at London’s prestigious Marquee Club. During the 1990s he was trained as a Bard, poet and storyteller in the Order of Bards, Ovates and Druids, and it was during this time that he found his artistic expression within folk music, forming the ‘Mystic Folk’ band Spiral Castle for a support concert with Robin Williamson (founder member of the highly influential Incredible String Band). Spiral Castle played regularly during the late 90s at festivals including the Pagan Federation International Conference at Fairfield Halls in Croydon to a capacity 1500 audience. In 2000 Damh made the decision to go it alone, and marked this with the release of his debut solo CD Herne’s Apprentice in 2002 to extremely favourable reviews, following this up with The Hills they are Hollow in 2003, Spirit of Albion in 2006, The Cauldron Born in 2008, all equally well received by fans and the music press. In 2009 he released Tales from the Crow Man, an album of mostly traditional folk songs alongside Eric Bogle’s classic anti-war song Green Fields of France. In 2010 he released a long-awaited live album As Nature Intended (download only). Antlered Crown and Standing Stone was released November 2012, and Sabbat was released in 2014.

After the release of Sabbat Damh began a multi-year project to create the Four Branches of the Mabinogion in audio format, with song, story and film-type scoring. Y Mabinogi – The First Branch was released in 2017 with The Second Branch coming out the following year. The Third Branch was released in 2020, after which Damh plans to take a break to record another album of songs before returning to The Fourth Branch.

His inspiration comes from the ancient myths and legends of the British Isles and Ireland; from King Arthur to Taliesin; from the Welsh Mabinogion to old British folk customs.

Damh has always believed that his job is to entertain his audience and take them on a journey through the old stories and myths of this land. His audiences leave his concerts having been fully engaged by Damh, and with a deeper understanding of this land’s ancient heritage. He has performed extensively on the spiritual festival circuit in the UK, USA, Australia and Europe, and is as much at home playing to an intimate audience of 50 to playing to 1500+ at the larger venues.

In August 2007 he was one of the featured folk singer/songwriters on the John Barleycorn Reborn compilation (produced by Woven Wheat Whispers and Coldspring Records) of modern folk artists who were considered to be breaking new ground in the current folk scene by working deeper with the UK’s mythology and folklore.

On the Summer Solstice 2010 Damh was initiated as the new Pendragon of the Order of Bards, Ovates and Druids, taking over from artist Will Worthington who has served the Order as Pendragon for the previous 19 years.

In the Summer of 2010 the members of the Archway Theatre Company’s young adults workshop chose ten of Damh’s songs as the basis for their play, The Spirit of Albion. In 2012 the play was made into an independent, low-budget musical film.