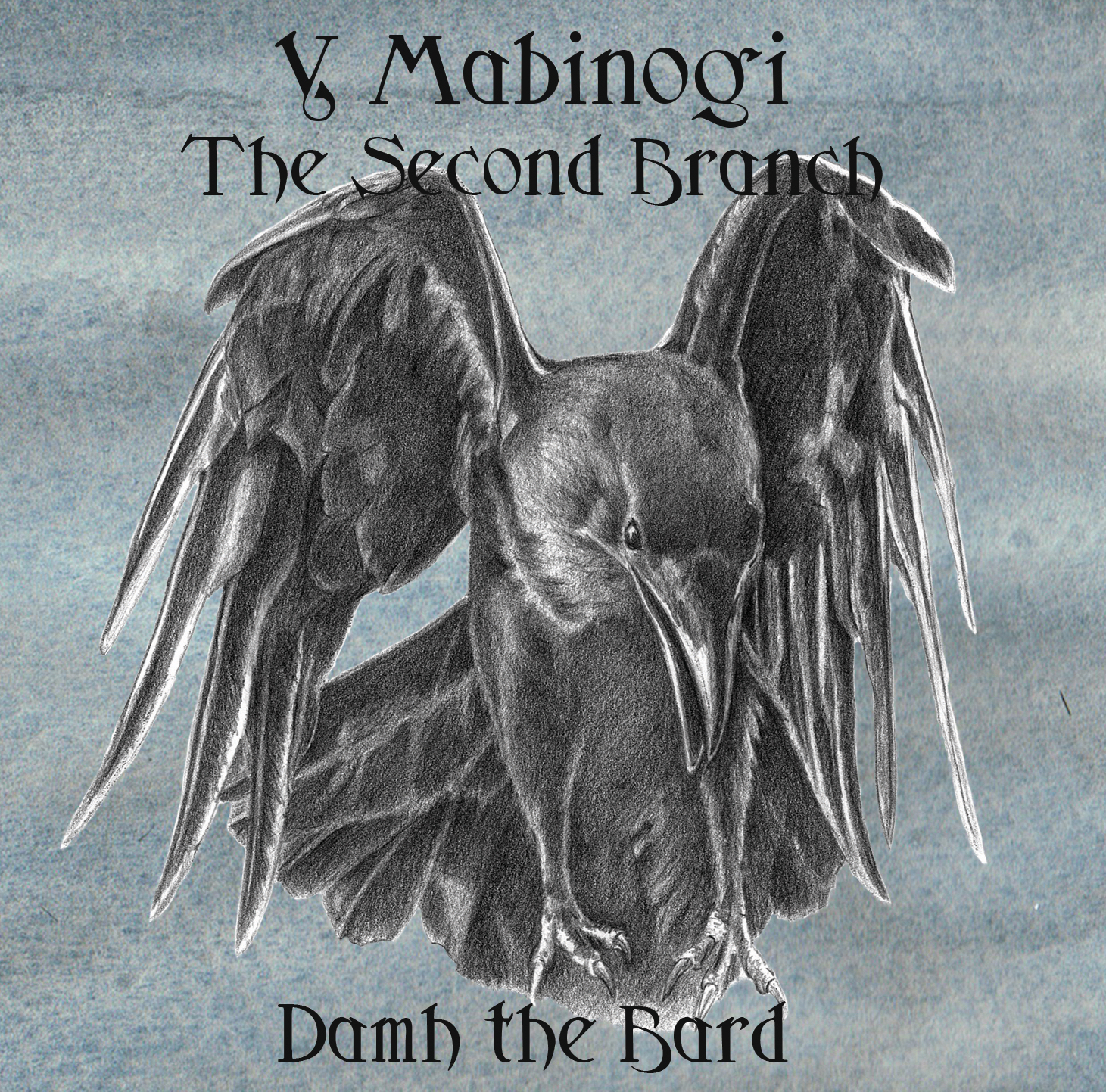 So how did this all happen?

The first thing to do was to delve into the scholarly work that had been done on the Second Branch of Y Mabinogi. The background research, the exploring, finding books old and new, the familiar thud as they fall through the letterbox, then reading, reading, reading. I quickly found there were a lot of opinions on the origins of the Second Branch tales. Some suggested the entire tale was the story version of the poem attributed to the Bard Taliesin called the Preiddeu Annwn, or The Spoils of Annwn. Some said the tale originated in other Irish stories, some tried to break the tale down into the component parts and place them in Ireland and Wales. Some suggested historical Welsh figures as the inspiration for Bran. A fascinating time as those shady areas are suddenly illuminated with light, and I stepped in, to see what looked useful, and what might be a distraction. Eventually the books began to repeat themselves, and I realised it was time to move on.

By then the tale was very familiar and I began to see the moments in the story that would be best told through music and song. Again, not too many – I wasn’t writing a broadway musical here, this was a continuation of the work began on the First Branch, and I wanted that same feeling to blend into this tale. Eventually, once all Four Branches are finished, I want people to be able to listen all the way from Branch One to Four and feel they are hearing one story. What a night in that would be.

So I found the places where the songs would enhance the Journey.

The next stage was to write the spoken word parts. As with the First Branch I wanted people who had read/would read the current translations know that the story had been honoured, and nothing had been changed (no Peter Jackson Lord of the Rings/Hobbit alterations here), but the discoveries made by later researchers must also be placed within the tale, so the translations are honoured, but these are our versions of the story, for our time, with all we have learned about them since the 1300s when they were originally written down. So the tapping of the Mac keyboard fills the room, and I go off on a Journey, bringing in closer encounters with Taliesin, who was one of the survivors of the Great Battle, and decorating the tale with the findings of those Mabinogi scholars.

My good friend Kristoffer Hughes was once more my pronunciation coach, and boy did I need his help with this one. There were so many names. So I went through the text, highlighted the words and names I needed help with, and sent them off to Kris. A few days later audio files appeared in my Facebook Messenger inbox and there they were, all spoken three times so I could get my tongue around them. For this Englishman I will readily admit that some of those names were a challenge, but this is important to me. This recording would be around for many years, and I wanted them to be right. Also, when we look at some of the epic Bardic tales and poems they have lists of names, and they are there for a reason. So once more I am deeply thankful to Kris for his help and coaching.

In Spring the Beast from the East arrived. All traffic stopped, light aircraft from Shoreham airport was grounded. The house and the road outside fell silent. So on the day the snow fell deep and white, I was in my studio recording the spoken word for Y Mabinogi the Second Branch. One day, and it was done. Thank you Weather Gods.

Kristoffer Hughes travelled all the way from Anglesey to Sussex to record the Welsh spoken word as the Scribe opens this album, just as he opened the First Branch. He also spoke the words “He who is a Chief, let him be a bridge”, an important moment in the tale and I wanted that phrase in Welsh – I had no idea how I would use it at the time, but knew it would be needed, and it was. Then Kris was the first person to hear the spoken word story from beginning to end, before any of the songs had been put into place. All was well.

This always takes longer. I knew what the songs would be about, but I had no melodies or lyrics. So I took them one at a time. I spent time thinking about the atmosphere the song needed to bring, what needed to be said, where they should end so the narrative would pick things up seamlessly. Lots of thinking, lots of singing as I walked along the riverbank with Oscar, lots of weird looks as I walked past people, not really noticing them, lost in the moment as the melody and song ideas began to come together. In the end I finished them all and thus the recording of the songs could begin.

I took a week where I had no distractions, nothing else disturbed me. I went into the studio, and recorded the songs. What an incredibly creative week that was! As I’ve said on the blog before there were no places for uplifting Damh the Bard anthems here. This was the soundtrack to a war. I needed battle horns, lots of drums, and epic scoring. It also needed moments of real emotion, of heartbreak and sorrow. This album took me to places I had never really explored, and I learned a lot during the process.

The folk singer Blanche Rowen agreed to sing on the album as Branwen. Just as when I first heard S J Tucker sing, and knew she had to be my Rhiannon, so Blanche was my Branwen. Blanche has a beautiful mezzo-soprano voice, is a Welsh speaker, and has that strength with vulnerability in her voice that Branwen needed. When I first heard Blanche sing on her two songs I confess, I cried, and that was absolutely the right response.

As I wrote the last song on the album The Birds of Rhiannon I realised that Rhiannon would once more be with Pryderi, and thus another Damh the Bard/S J Tucker duet finishes the songs on the album. SooJ’s performance on this song is heart-achingly beautiful, and once more she brought the nurturing and protective aspect of Rhiannon into the story with her amazing voice.

The moment when the songs are dropped into the spoken word is a magical moment. I cut the audio, create the space, drop in the mixed song, and then play that section through. Goosebumps. Every time. What you hear is exactly how they were placed. I changed nothing about them, and somehow they all worked. So the next stage was the mastering of the songs, and then the album was ready to mix down, and play to a few people. I invited members of my Druid Grove around, and a few other friends, made them all a cuppa, and they sat through the entire album. This was the ‘Beta Test’ night. I wanted to hear their criticism, I wanted to hear if anything jarred. When you are so close to a project sometimes things pass you by, so this was a really important night to me. I’m deeply grateful I have very honest friends. The story worked really well, but there were just a few tiny adjustments – the spoken word starting too early after a song, music beginning too quickly after dialogue, that kind of thing – so I made the adjustments the next day and that was the album finished. I bounced it down into audio tracks, and it was done. Cerri then began the artwork and what an incredible job she has done with this album cover. In a way these Y Mabinogi albums are making me lament not just the decline of CDs sales, but the loss of vinyl. These would have made incredible gatefold album covers. Those who listen on streaming services will never see the inside of the CD booklet and cover she created. It’s a genius work of art. Those who buy the downloads will see the main cover, as a tiny jpeg on the screen. It really is a shame, but thus is the ‘progress’ of music consumption.

But here’s a thing.

When all four albums are out my plan is to create a beautiful box that all four CDs can slip inside. It’ll have Damh the Bard – The Four Branches of Y Mabinogi on the side with more great artwork on the front. A collectors piece. So maybe that will encourage more people to buy the CD, and thus enjoy Cerri’s work.

So the album is now finished. I have uploaded the audio and images to my music aggregator, and they are in the process of sending it off to iTunes, Apple Music, Spotify, Amazon, all the usual digital services. It’s be available there on the 16th November.

But the CD and download are already available to pre-order directly from my store on my website. If you pre-order either the CD or the download from me you will get an email on the 9th November, a week before it’s available anywhere else, that will have a download link so you can start listening to the album straight away, even while the CD is travelling to you by post.

As with the First Branch, if you can, reserve 1 hour 20 minutes just for yourself. Light a candle, pour a nice Single Malt (or whatever drink you like) sit down, and listen to the entire album in one go. Treat it like a movie, and let me take you on an epic Journey.

As ever, thank you, thank you, thank you for supporting my work, whether that is the music, the concerts, the podcasts, whatever. It truly is an honour to serve the community and be part of something that will, I hope, be there for many generations to come.

If you want to pre-order the new Y Mabinogi – The Second Branch album, you can do that my clicking this link right here.

I cannot wait for you all to hear it!