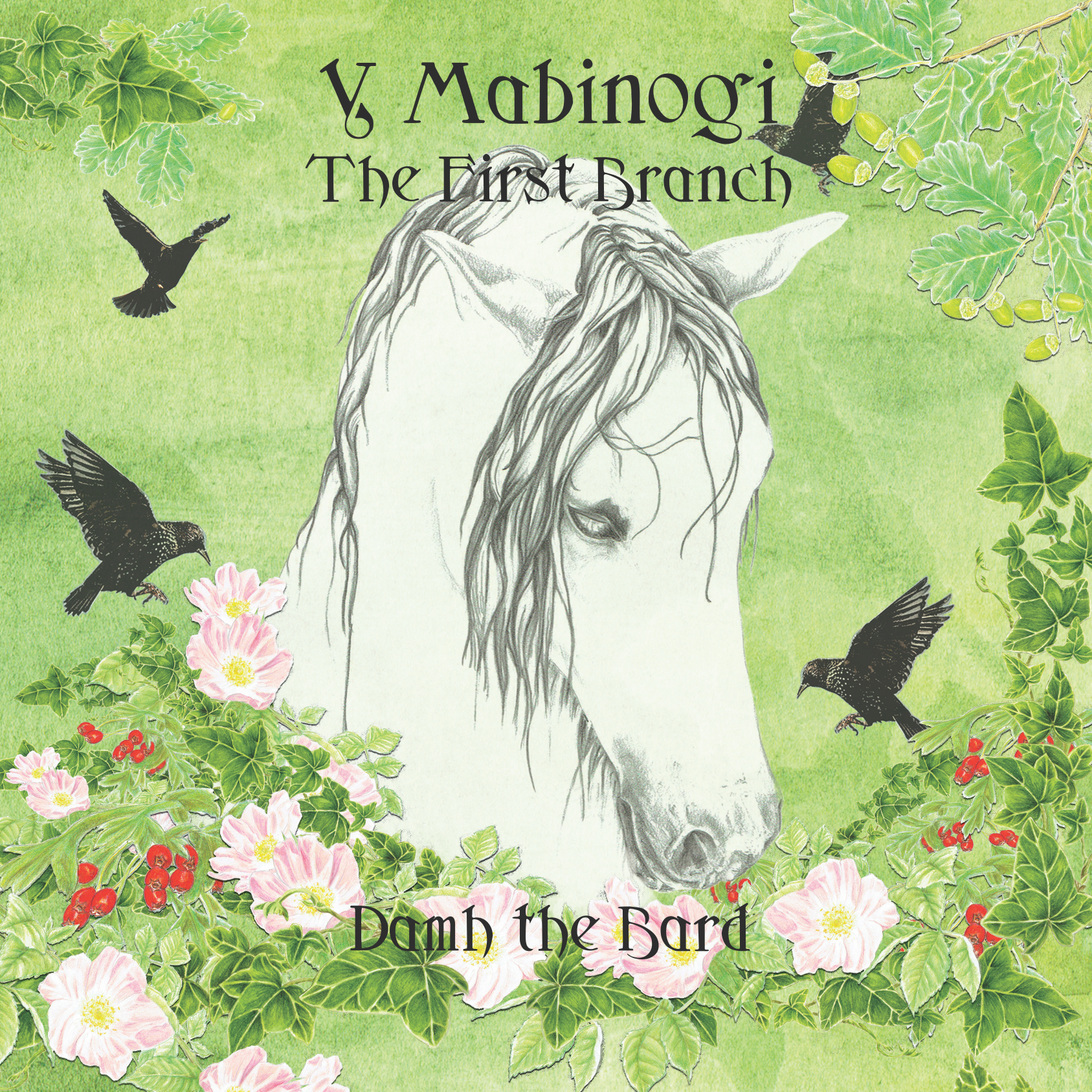 Y Mabinogi – The First Branch – Have a listen to a song!

Yesterday I opened the pre-orders for my new album, Y Mabinogi – The First Branch. The fruit of a journey that began back in 1995 when I wrote the song Oak, Broom and Meadowsweet, and planted the seed that ultimately has led to the first of four double albums, each one telling the tale of one of the Four Branches of the Mabinogion. This album tells the tale of Pwyll and his meeting with Arawn, a King of Annwn, the ‘Celtic’ Otherworld. His meeting with the Goddess Rhiannon, and the birth of the Mabon himself, the focus of the tales of Y Mabinogi, Pryderi.

Cerri’s artwork for the CD is heart-achingly beautiful. She has outdone herself, sometimes staying up until 3am in her studio, drawing away, creating images that add even more to the experience of the album. The cover… oh, my Gods. See what I mean?!

And here is a song from the album. This song happens at the beginning of the second part of the tale, just after Pwyll and his retinue walk to the top of a hill nearby called Gorsedd Arberth. It is said that when a person sits atop the hill one of two things will happen, either they will suffer injury, or they will see a wonder. Well, of course, with all of Pwyll’s warriors with him, he is not worried about suffering ‘wounds or blows’, but as for a wonder, he would gladly see one.

So he sits there, atop Gorsedd Arberth, to see what will happen next…

I’ve only placed songs where they progress the tale and I think it works well, that blending of story and song.

There are three guests on the album:

Alan Wheatly-Crowe – the guitarist from my old Heavy Metal band, Targa, adds his incredible skill to the song Who is this Coming?, the song that introduces Arawn – if any God demands some serious guitar shredding it’s Arawn! It was great to reconnect with Alan after so many years. He is one of the best rock lead guitarists I have ever known.

Kristoffer Hughes – The Head of the Anglesey Druid Order, we have been friends for years. Me and Kris are cut from the same pastry. We both love these tales and it was very important to me that Kris liked the album and the direction I had taken things. When he came to my studio to record his spoken word part I played him the entire demo version of the album. He was the first to hear it. I was happy and relieved. He loved it. Kris opens the entire album. The first thing you will hear when you press play is the sound of Gregorian Chant, then footsteps, as a monk walks through the cloisters to the Scriptorium. Taking a seat you then hear the sound of quill on parchment. Kris’ voice begins, telling the tale of the First Branch in its native language of Welsh. It was important to me to honour the original land of these tales and it brings me out in goosebumps every time I hear it. From his voice I then begin to introduce the tales, as the Gregorian Chant recedes.

S. J. Tucker – Yes! My Bardic Sister joins me on one of the songs. I knew that I wanted the final song to be a duet between Pryderi and Rhiannon. I won’t write any spoilers here, but it’s an emotional moment, and I wanted a particular voice to sing her part in the song. In June I went to the Pagan spirit Gathering in the USA and SooJ was there too. As I sat watching her first performance I knew straight away that I was listening to the voice of Rhiannon. I asked her the next day and I was delighted that she agreed.

In truth I cannot wait until the 26th September when the album becomes available to you all, but until then I hope this has wet your appetite! If you want to pre-order the CD you can do that here. If you order from me directly you’ll get an email on the day of release that will have a link for you to download the album, to listen to right away, while your CD is on its way to you in the post.

It’s been quite some Journey. Soon I will hold a small ritual, to thank Pwyll, Rhiannon, Pryderi, Teyron, Arawn and all, for their blessings and guidance. For holding my hand and leading me through their tale. Then I will open to Bran and Branwen. Invite them in, and to take my hand as I begin the next part of the Journey, into The Second Branch.

Already the corvids are gathering.

It seems they are impatient for their tales to begin.

I will not be keeping them waiting.

17 responses to “Y Mabinogi – The First Branch – Have a listen to a song!”