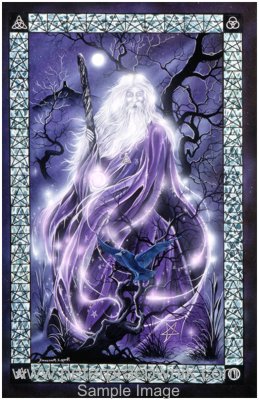 Thinking About – What art will we leave behind?

This article really continues the theme set by a recent post about a moment that changed modern Paganism.

If the publication of Triumph of the Moon gave modern Pagans the permission to accept that our path was relatively new, that the stories we had been told of a surviving ancient Witch Cult by the likes of Margaret Murray (her terminology, not mine) weren’t based on fact, but were more hopeful creations, then we are indeed right at the beginning of something vibrant, magical, and potent. The squabbles people see, either in groups, or on the internet, are a part of a new path finding its feet (even though they can be quite upsetting and destructive).

It took a while for people to accept this, and some still hold on to the ‘unbroken lineage’ thing, and in some ways that’s quite ok, because although the path may be cracked, and in places you’ll find quite large areas where the path completely disappears, the inspiration, the stories, the poetry of Bards who lived at least 1400 years ago, and who wrote about places, Gods, and heroes whose names maybe, just maybe, would have been known and understood by those we call the ancient Druids, is still there. And what is definitely still there is the Book of Nature, giving all of the lessons and wisdom that could be learnt in a lifetime.

How exciting is that! A week or so ago me and Cerri watched a TV program called Civilisations. We watched the first episode when it was on TV, then at the end the announcer said that the rest of the series was already on iPlayer and could be watched right now. So we engaged in that now common practice – we made some tea, and binged the entire series.

It was great. It showed the changes in art throughout the many civilisations that had come to the fore since the Neolithic. From cave painting, to the Sistine Chapel, and it got me thinking. If, as I said in that previous article, we will one day be the ancient ancestors, and one day what we now know as a young spirituality, will indeed be an ancient Paganism, what art are we creating? What art are we leaving to show future generations how we saw the world? I think many of us found our Pagan paths through the New Age movement back in the 80s and 90s and as I think back I remember that it was the art of two painters whose vision of the magical world reached right into my heart and soul. They were Peter Pracownik, and Andrew Forrest. I looked at their work and the images just drew me into another world. I could feel that the magic within their art was all around me, in the trees, plants and the landscape, and I have no doubt that the worlds created by Peter and Andrew helped me with my creative visualisation, and thus my inner Journeying.

Later on I was enchanted by the art of Cornish artist Sarah Vivian. For many years she would be an exhibitor at the Pagan Federation Devon and Cornwall conference, and each time I had a new CD out we would do a swap of CD for print. I have her prints, and a large Peter Pracownik print on the walls of my studio, and they give me constant inspiration. All I need to do is look into their frames, and I find myself once more lost in a world of magic and wonder.

Last year during my time spent at PSG in the USA I was introduced to the work of  Laura Tempest Zakroff. Very different work from Peter and Andrew, but just as potent. I can imagine some of Laura’s art being discovered on the walls of ancient And of course there is the art from my wife Cerri, who has designed the album art for all of my CDs since Herne’s Apprentice, and also created the “Herne Horns’ design I have used as my logo since then on various albums, my website, and my guitar picks. A logo that has been used as tattoos, on lingerie (honestly), and at one event she met a man who asked why she had copied the logo and it was copyright. It turned out that one of his Coveners had done the copying, and told the group it was his design. Her clay sculptures sit upon the altars of Pagans across the world, and her silver and bronze clay jewellery is also to be seen around the necks of many magical folk.

There are loads more. Paganism does inspire the creative soul that’s for sure. But I wonder how our art will survive over the coming centuries. And not just our art, but our music, and books. If there are still documentary programs being made in the year 3000 (maybe being transmitted directly into our heads by then…) what might they make of the art left behind by the ancient Pagans of the year 2000? Will they care? Will any survive? Might it be that the lust for new stuff and upgrades means that each new generation will leave the old stuff behind, and simply go for the new? If indeed there is such a thing as reincarnation, will I return and see one of Cerri’s sculptures as an exhibit in the British Museum? Or an ancient Peter Pracownik original being carefully restored for the ‘Tate 3000 Exhibition of Pagan Art from the Ancient World’? It’s interesting to consider this. What of our traditions’ art may survive? What will we leave to show the people of the future how we saw the world?

9 responses to “Thinking About – What art will we leave behind?”