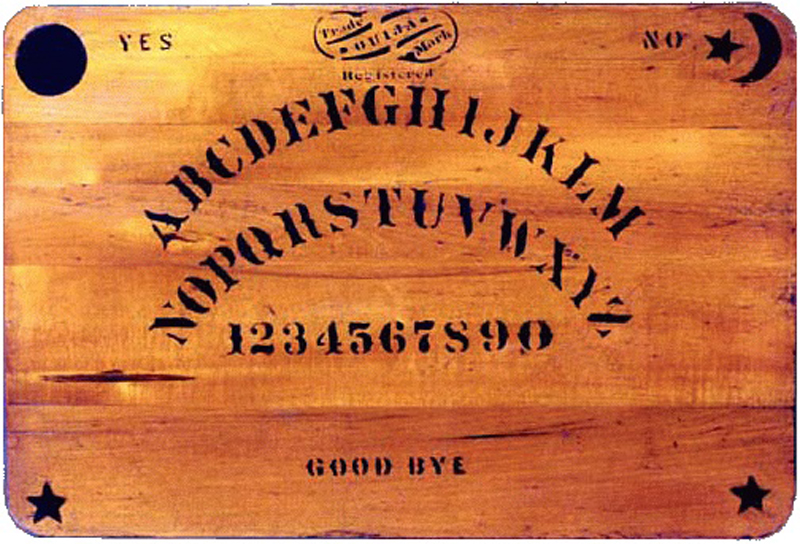 Thinking About – The Ouija I wondered how my ghosts article would be received and was delighted by the response which led me to ponder a little more.

This topic can be seen as a continuation from that article and deals with one of the ways we have used to contact those who have passed over. I’m talking about the Ouija board. Mention that word and the response is always polarised between those who see the device as a harmless, positive tool, to those who would never go near one.

The name is a combination of the word yes in French and German. So it’s really a yes yes board. Although automatic writing, and contacting the dead via a planchette can be traced to around the 1100s in China, the board as we know it today, in fact the name Ouija itself, is a trademark of Hasbro Inc, the toy and board game company, who registered the trademark, and indeed patented the idea, back in the late 1800s, producing the Ouija board as a quaint parlour game. It was immediately popular and could be seen everywhere from a regular household, to spiritualist churches, with the highest usage seen between the 1920s to the 1960s. Of course they created quite a stir in Christian circles, many of whom condemned them as instruments of the Devil, saying that the only spirits that would ever be contacted would be demons. That contact with the dead is the realm of God alone, and therefore people using them would come to harm.

I wonder how many of you readers have used one? Some may well use one regularly as part of your spiritual practice. Others, like me, used one back when they were teenagers and probably that’s enough, and leave them alone now. During my training in the Occult Church Society back in the early 80s a good deal of time was spent learning the safe use of the Ouija. I remember the way it was described quite clearly. It went like this –

Imagine the darkest black you can think of. So dark that you cannot see a thing. You can’t tell if your eyes are open or shut. Then imagine the brightest white you can imagine. So white it’s blinding. Between these two realms is a thin membrane, but it’s enough that no light bleeds into the dark space. When we use the Ouija we do the equivalent of taking a tiny pin, and perching the membrane. That tiny white dot will shine out in that other space and whatever, or whoever, is nearby, will be curious, and will take a look.

I have to say that is was stressed that the use of black and white was not in reference to any good or evil ideas we might associate with them but purely as the way they interact with each other in this instance with light and shadow.

This explanation suggests that, when we all sit in a circle at a seance and ask to speak to Great Auntie Maud, it’s highly unlikely that Great Auntie Maud will be the spirit who turns up, but rather a random, and curious, spirit who just happened to be in the right place at the right time. Another example used was to suggest getting a phone book, opening it in a random page, then tapping a name, and inviting them around to your house for dinner. So it suggests that in some Occult circles there is a strong element of randomness to the resulting contact.

I’ve had two experiences with the Ouija, both from my late teens. Each one revolved around the band I was in at the time. The other members had been playing with the Ouija for a few weeks, and although I was curious, I had a healthy scepticism and concern about it. We were having a band rehearsal and for some reason they decided it would be fun to do a Ouija session. I reluctantly agreed. We set out the alphabet in little pieces of paper around the edge of a table, Then added the numbers 1-9 with a zero too. We had the words YES and NO on a further two pieces of paper. And GOODBYE. Once that was set up we placed a glass in the centre. I didn’t put my finger on the glass. I just watched.

“Is there anybody there?”

Within seconds the glass was moving in circles. Then it went to YES. We asked who it was. It didn’t say. Where are you? “In Limbo”, was the reply. In truth we asked some pretty deep questions of this spirit, who was very friendly and forthcoming. Then one of my friends asked “Can you have sex in Limbo?” Well, we were teenage boys… “NO” came the answer. There was much booing from the teenage boys in the room, of course.

“Who makes the rules in Limbo?” we asked.

I have to say I wasn’t prepared for that one.

“Behind Dave,” came the reply.

“Can you prove you are real?”

Ok. There was no way I wanted to see the spirit, so I asked if I could touch it. I held out my arm and moved it slowly behind me. About 12 inches wide it felt like I had my hand in a deep freeze. Every now and then my leg would go cold. “Are you touching me?” I asked. “YES”, came the reply.

My teenage mind filled the world with these spirits. In the park, on the swings, walking in the high street, existing in the exact same space as us, yet in some different dimension. It really was quite a life-changing and positive experience for me. We said goodbye and got back to the music.

My next experience was somewhat more challenging. I hopped on my old Yamaha FS1E and made my way over to my friends house. When I got their his entire family was around their kitchen table holding a seance. I walked into the kitchen and heard my friend’s Dad say “C*nt? Who’s a c*nt?”

I won’t say too much more here but the spirit continued to insult me. Whoever it was hated me and used the most foul language. When it was about to go it spelt out FOLLOW HOME. Well, that was it. I was terrified. As I rode home I wondered if this foul-mouthed spirit was sitting on the back on my bike. But nothing happened. I need not have been worried. But that was the last time I was ever in the vicinity of the Ouija. I’m very happy that I had that first experience, but the second only reinforced the idea broached by the Occult Church that you just never know who or what you are going to get.

It is a polarising tool. Some of you will love it, others will not. Some might be quite angry about the idea. Either way it’s good to discuss these things. Have you had an experience with the Ouija? Was it beneficial or not? Would you do it again? Do you see it as a harmless tool, or as something that we cannot understand, and therefore should leave well alone?

20 responses to “Thinking About – The Ouija”