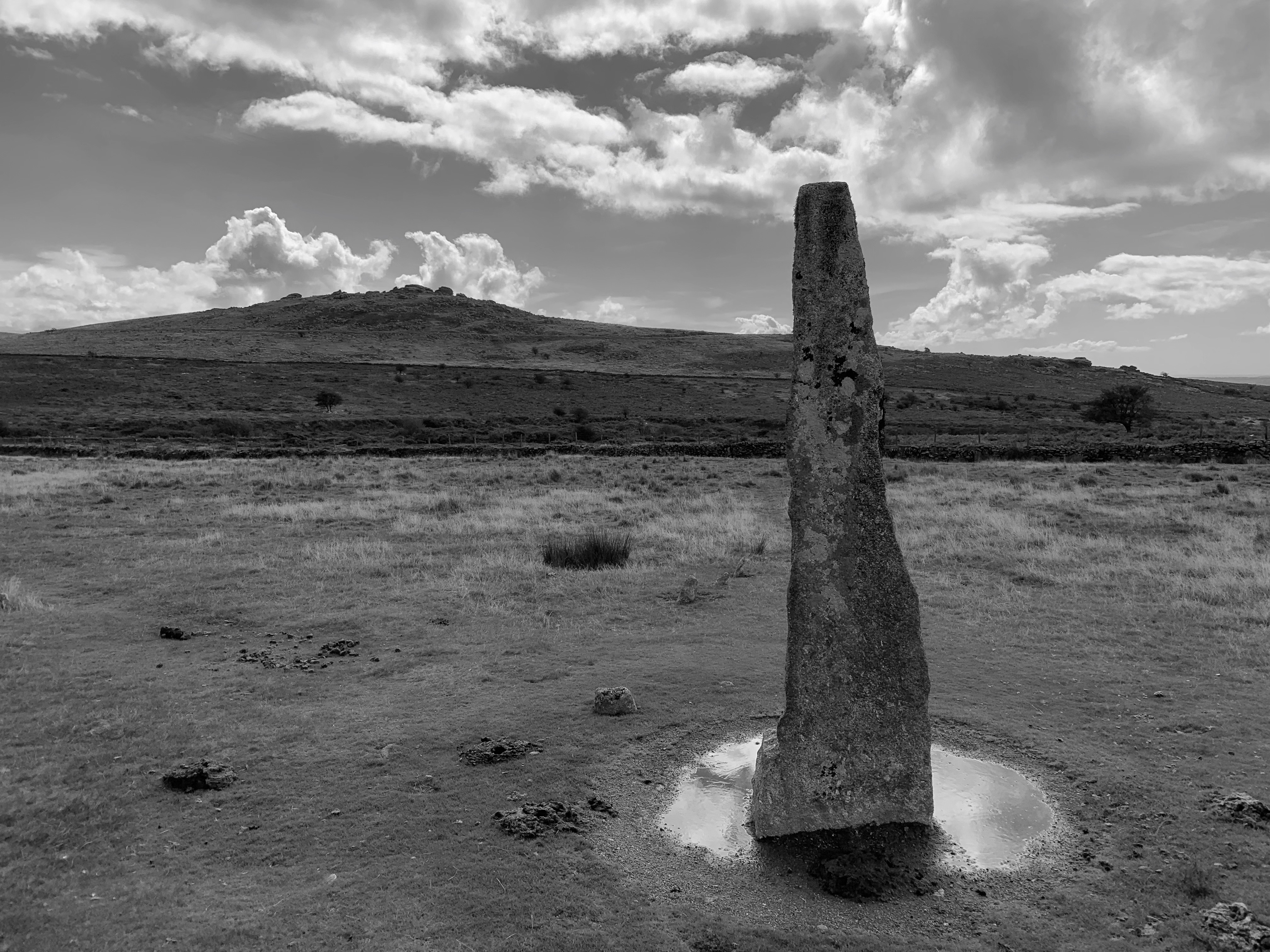 They Stopped Telling their Stories Last week Cerri and I took our first holiday of the year. We went to one of my favourite places, Dartmoor, with the intention of doing nothing other than spending time in beautiful places, visiting sacred sites, and taking the time to look at our lives and re-group.

On the first day we drove deep into the Moor, parked the car, and walked up into the hills to visit Grimspound. There is something about peaty soil that seems to absorb sound. Dartmoor can be utterly devoid of the sounds of human habitation – only the wind, the sheep, and the calling ravens flying above Hookney Tor accompanied us as we walked. I wrote a song about Grimspound when I was here in 2005. Just sitting in the remains of one of the roundhouses with my guitar the place seemed to just whisper its story to me. A late bronze age settlement that nestles in the valley between Hookney Tor and Hambledown Tor it is surrounded by a massive fallen stone wall, but even though it lies in such a deserted place, it still feels so alive to me. As if the ghosts of those ancestors still walk that place, still live within those walls, and still sing their songs. We spent a long time there and walked to the top of Hookney Tor to look down on the settlement, and commune with the circling ravens.

The next day we went to another well-known Dartmoor site, Merrivale. Not quite as isolated as Grimspound, the nearby road is a lot busier, the car park a lot bigger than the simple layby. Merrivale is another settlement site, but this one has stone rows, standing stones, and a stone circle. It was on that same trip, the one during which I had written Grimspound, that I sat here in the centre of the stone circle at Merrivale with my guitar, took in the atmosphere of the place, and wrote this verse of Hills they are Hollow:

There is an old circle of stones, that stands on the Moor, every moss-covered face tells the secrets of ancient lore,

The Tors stand as Guardians, witnesses to the Rites of Nature’s Gods, of darkness and of light. So we walked along the stone rows, past burial cairns and standing stones, until we arrived at the stone circle. It’s a lovely small circle, the ground was dry so we sat and talked in the sunshine. In one of the silences, I looked around and opened to the Spirit of Place, just as I had done at Grimspound the day before. Grimspound is so obviously a place where people lived and, as I said, it’s very possible to feel those Spirits still walking among those ancient fallen walls. But at Merrivale, on that day, it felt different. There are thousands of stone circles all over the island of Albion. There are many theories as to what they were used for, but nobody knows for sure, so they stand there sometimes taunting us, saying, “You may wonder, but you will never know”. Many modern Pagans have taken these sites and others like them to their hearts – I’m one of them – and we have developed our own relationship with these ancient places as temples within which we can commune with those ancient peoples, opening to them, and learning from them. However, at that moment, sitting in the peace of the Merrivale stone circle this wave of frustration came over me, that these monuments are here all around, used by people only a few thousand years ago, yet we know so little about their religious and spiritual beliefs. Over in Egypt, in Greece and Rome, even at places like Göbekli Tepe in Turkey, we know so much more. But the ancestors of these islands didn’t write stuff down, so their voices are distant, rarely heard.

“It’s so frustrating! Why did we lose so much?” I asked.

“Because we stopped telling our stories,” Cerri said.

In an age of oral teaching and tradition at some point, those stories stopped being told, and thus they were forever lost. This sent me down a rabbit hole of thought as I drifted towards the tales from the Mabinogi. If Rhydderch hadn’t commissioned the writing of the White Book, or the Red Book hadn’t been written, would any of us know the names of Gwydion, Blodeuwedd, Rhiannon, Bran, Branwen, Pryderi? If the tales of young Gwion and Cerridwen had not been committed to parchment, those names, their stories, their wisdom, would have been lost to us forever, and those who travelled to Llyn Tegid and looked out to the waters of the lake would never know the stories of that place. And where I now sat, within the circle of stones in Merrivale on Dartmoor, what tales were told, what names were spoken? Names that are lost to us. And I know that to some the Mabinogi, the Eddas, the tales of Cú Chulainn and Fionn mac Cumhaill, the story of Cerridwen and Taliesin, Arthurian tales, all of these and more are just nice stories, but they are so much more than that. In the same way as when I hear the voice of a Nordic person Yoiking, or the sound of Native Americans singing and chanting, the overtoning of the old songs of Mongolian people, it’s obvious that sacred tales help to bridge the huge gap that has developed between people and the land.

See that hill on the South Downs? The one crowned with the remains of an iron age hill fort? That was once a huge boulder that was thrown by a giant. The giant of that place picked up a huge clod of earth himself, and sent it hurtling across the flood plains. It hit the first giant, killing him stone dead. He fell back onto the Downs and his outline rests there still to this day in a place called Wilmington. And what about that big round pond? Over there in the crook of the hill. Big enough to house a Dragon some say. In fact it’s the home of the Knucker, a vast Dragon that once flew over the Weald, its wings outstretched and so vast they blocked out the sun. Some say ‘e’s still down there, waitin’ and listenin’. Won’t be long before Old Knucker wakes up again.

And as I pondered I thought that maybe, just maybe, some of those old folk tales may contain some of the remnants of those very ancient stories, told in bronze age roundhouses as the cold and dark of Winter began to bite. Maybe they didn’t stop telling all of their stories, and could it be possible that some of them still remained, changed and adapted as times and peoples’ needs altered over the centuries.

I don’t know. We will never know. But one thing is certain – we must never again stop telling our stories.

12 responses to “They Stopped Telling their Stories”