Regular readers of my blog will know that before I joined the Order of Bards Ovates and Druids I was a member of a Ceremonial Magic group and had been for many years. Sadly that group disbanded, and I was already feeling that I wanted to experience something a little more earthy, hence I began to explore the Earth-Based spiritual paths of modern Paganism. Since I stepped on the Druid path I’ve had plenty to explore. My Ceremonial Magic training came in very handy in those early days as I had already been working with the Circle, the blessing of fire and water and the Elements for many years. Druidry approached them in a slightly different way, but it was a great foundation upon which to build. But I found myself using less and less of the many Qabalistic principles and associated Occult knowledge I had learned as a Ceremonial Magician, as I adopted more elements of the Magic associated with folklore, and my Path has been there for many years.

My route into Ceremonial Magic had been as a teenager with the Tarot, the books by Aleister Crowley, and the associated writers of the Hermetic Order of the Golden Dawn. Remember, this was way before the internet and also before the 90s boom in esoteric books. There really wasn’t much around at all, but what was around certainly had some teeth, and teenagers have always like things with teeth. I remember reading my mate’s Tarot in the back of the maths class, and when that same friend told me he’d been initiated as a Neophyte into a magical group, well, I was in too, and the proper Journey began. When I stepped onto the Druid Path I stopped using the Tarot, favouring instead the Ogham with its deeper relationship with modern Druidry.

So I left the Qabalah, Ceremonial Magic and the Tarot behind to focus on my Druidry, and I’ve loved it all. The thing is that for the last two years the Tarot had been calling me again. To the point that instead of pulling an Ogham for the week, I began to draw a card… or three, and I found myself falling in love with them once again. Then I heard that a good friend of mine, Kristoffer Hughes, was going to run a 7-week online Tarot course, well, I jumped in, and it was like being re-introduced to a dear old friend. The approach to the Tarot he taught was built around the Tarot’s deep association with the Qabalah. It turns out my dear friend Kristoffer was a closet Qabalist, which was no surprise really after the long and in-depth conversations we’ve had about the structures and mechanics of Magic. As the course continued I was reminded of more and more of those principles I’d learned, principles that had informed my Druidry, but that I had not really consciously gone back to for over 20 years. It was like finding your favourite old record you hadn’t heard for 20 years, popping it on the turntable, hearing those familiar crackles as the needle approached the lines, then hearing the first BONG from the opening bells of AC\DC’s Back in Black album.

Being properly re-introduced to the Tarot and all of the Occult symbolism of the Qabalah that is contained in those small but incredibly powerful images (I refer to the Rider-Waite-Smith deck here, with the images painted by Pamela Coleman Smith) has opened a door for that inner Hermetic Magician that, for whatever reason, I now realise I had held closed.

Before him stands the Druid I have become.

Oh look, they are smiling at each other.

I know they’ve both been listening to each other’s mutterings through a closed-door for all of these years and it’s so good they have now been properly introduced.

Now to listen to the discussions they are going to have! 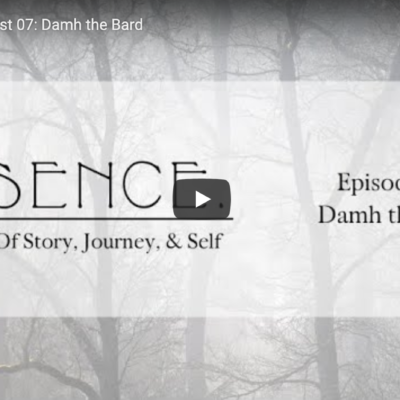 3 responses to “The Tarot – Hello to an Unexpected Old Friend”