Tales from the Road – Oh Vienna!

Vienna is one of my favourite cities. It seems to have such a relaxed atmosphere, and I adore its relationship with the Arts. I guess having such famous offspring helps, and it seems to value the Arts extremely highly, and I have never felt that being a musician is an undervalued profession here. This would be my fourth annual concert in the city, and my third visit to the Austrian Broomstick Rally.

We were collected from the airport by our dear friend Siggy, the person mainly responsible for my connection to the harp, and taken into Vienna to chill out for a few hours before going to the concert venue. I’d woken up at a Premier Inn at Heathrow at 4.30am so needed a power-nap before the gig that night. So rested we made our way into the city.

There was a buzz in the air that night. Everyone was in high spirits and the evening was opened by the Pagan Piper Project, a mass of singers and musicians who I had seen play a few songs at last years Broomstick. They were wonderful. Check them out atwww.paganpiper.com . The venue was full, with a few standing, and the atmosphere this year was fantastic. From the opening song we were all singing together and I don’t know if I was imagining this but it felt like there was some release of tension in the air – our lives do seem to be complicated right now with work, and the political climate – it just seemed like we were all thankful of the opportunity to just let go for a few hours.

The next day we hopped onto a tiny train that took us into the Austrian mountains. As each mile passed we were taken deeper and deeper into the countryside, and what countryside! Eventually we arrived at the tiny village of Anneberg and picked up from the smallest station I’ve ever seen to be taken to the new location for this year’s Broomstick Rally. It was pretty dark by then so I couldn’t see what was surrounding us, but when I got up the next morning I found that we were surrounded by mountains, held in a kind of natural cauldron. Again I felt that the atmosphere of the Broomstick was filled with joy and that same feeling of letting go.

On Friday afternoon I helped Cerri as she took the participants through a two and a half hour workshop and ritual based on the Taliesin poem The Spoils of Annwn. Then in the evening there was the annual Broomstick Eisteddfod with music, storytelling, poetry, and dance. Yes, dance. Great Breton dancing to harp. Wonderful.

On Saturday morning Siggy guided us through a brilliant candle decorating workshop, and then later there was a fantastic Pagan Treasure Hunt, and the traditional game of Pentacle Rounders. As night fell we once more gathered around the fire for more music and story, under an amazing star-filled sky. 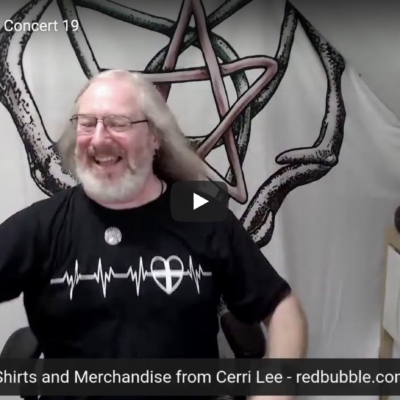 Here is the video of Saturday's live House Concert 19 which was streamed on Facebook and YouTube. I absolutely love these informal live shows and there are a couple of
Read More