Many of us will remember that moment. We might have been walking through a woodland, standing on the top of a hill or mountain, seated beside a waterfall, or maybe simply walking in the centre of the city, but something changes. It can be like a second set of eyes opens and we see the world for the first time. The illusion that created the human construct of modern life falls away.

Sometimes this can be utterly enthralling, but for others it can be debilitating and frightening. All of those things we held to be true about our lives, about money, work, security, about what is truly important dissolves, and we find ourselves feeling separate from that human world, but with so much more potential and connection to literally everything else.

I remember that moment and it was the first time I became aware of the power of magic. I had always loved fantasy fiction, with its wizards and dragons, but suddenly seeing that power surrounding everything, well, life could never be the same again. It’s like those old stories that say we should never eat the Food of Fearie. Some believe this is because you will be trapped in their Realm forever, but the more I considered this piece of Lore, the more it became obvious that it was because once those other eyes have opened, they can never again be closed. Things will utterly change, and we can never go back to the way life was before. That the Food of Faerie is the nourishment of the Otherworld and of Magic, a potent energy that is all around us, all the time. Opening those eyes is like taking a seat at the Round Table, but our seat is the one marked Perilous.

That is where my mind was going when I wrote The Cauldron Born. Once those eyes are opened the hill outside of town may call us on the night of the Full Moon. We drive to the base of the hill, then walk up the steady slope to stand upon its peak, overlooking the town below. Car headlights move along roads lit by yellow street lamps far below. The world of humanity continues without you. There on the top of the hill, bathed in the light of the Moon, you raise your arms. It’s the first time you’ve done this. Truly opened to the power of magic.

“I call to the Powers of Land, Sea and Sky, of Dragon, of Fearie, and Shades of the Night! I call to my Ancestors of Blood and of Bone! Of Womb, and Tomb, and Standing Stone!”

The distant sound of cars fades away in that instant. The light of the town in the valley below disappears, and you are left alone, standing, arms raised to the Moon, alone yet at peace with all life, open to the consciousness that is within all things, from the blade of grass beneath your feet, to the endless darkness of the Universe above. Bathed in the light of the Moon, there on sacred earth.

Then a thought. If I feel this way there must be others too. But where are they?

I wrote this song in 2007. Social media was only really just being born, so the way we used to meet was to seek out a local pub moot. There began the quest for others. At that moot may have been the leaders of a local Coven or Grove. Maybe the moot organised open rituals. That connection felt upon the hill alone begins to spread among others of your kind.

Bringing humans into that relationship can sometimes be a disappointment – many of us have been there too – but sharing our thoughts and feelings about our Pagan path with others is incredibly valuable. These days maybe the first thing we do is go on Facebook and find Pagan groups. Pagans have embraced the Internet since its earliest days. There were Pagan Newsgroups, then email lists, then message boards, and most of those have now been killed off by the behemoth that is Facebook. However, one thing I’ve noticed over the years is that we are not often at our best on the Internet. I wonder how many people new to the Path are scared away by the brashness with which we sometimes communicate via our illuminated screens. Who knows. I would always still recommend seeking out contact with people directly through a moot, or a conference, or open ritual, if you can, but I digress…

Time moves on, and one day we find ourselves standing upon that same hill, in circle with friends, all arms raised, chanting those same words, declaring our love for Land, Sea, Sky, for our Ancestors, the Dragon Energy of the Earth, and the Realm of the Fae. We have found others, just like you.

Group work can be incredibly powerful, but never forget that this connection is always a personal one. A magical group can add to our spirituality and our Pagan path, but from my experience if we come to rely too much on the group, and begin to let our own personal connection slip, that can lead to difficulties. Even if we are in a group, keep that daily personal practice going.

There is one more verse in the song. About a Charm of Silver being laid upon the hand of a Gypsy, and a following prophecy. I’ve been asked many times about this verse and whether it is in any way autobiographical. Well I’ll come clean. Yes it is. I was 17 and on my lunch break. I worked in a factory in Burgess Hill and I was in the Martletts town centre with my buddy Mick who was from Orkney. We were looking at cassette tapes to listen to during the afternoon at work. As we walked through the town there was a Gypsy woman standing just outside WH Smiths. She held a hand-woven basket and in the basket were little charms of heather, wrapped up in silver foil. She caught my eye and smiled at me, so I walked over.

“You have the eyes of someone who knows,” she said. “Let me tell you what I see.”

She held out her hand. “A charm of silver and I’ll tell you.” I gave her a 50p piece – the ‘charm of silver’ I had on me at the time. She smiled and closed her hand around the coin. “Give me your hand,” she said.

Her fingers traced the lines on my hand, her eyes opened wide, then she looked me straight in the eyes. “All of this you see around you is a construction. One day you will see through this illusion, and you will see into the Dream.” She let go of my hand, smiled, and gave me one of the charms from her basket.

I’ve never forgotten that moment, and as my pen moved across the paper writing this song, it all came flooding back to me, and the verse was written.

The song was complete. 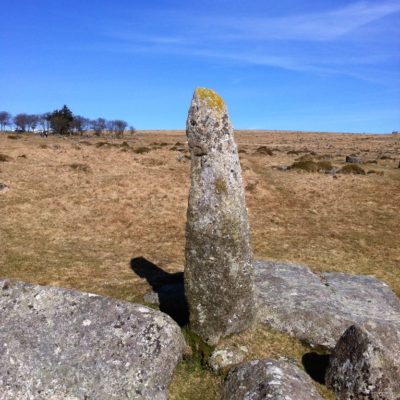 13 responses to “Story of the Song – The Cauldron Born”