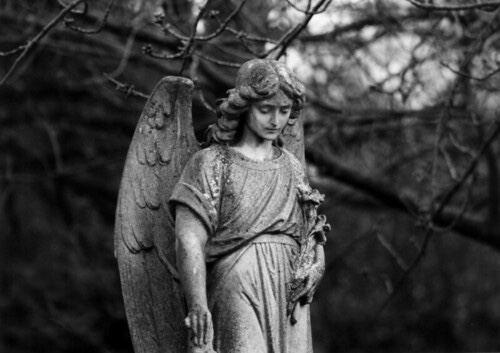 Samhain – The Ghosts walk among us once more

I remember when the ghosts seemed to be everywhere.

Back in my childhood, before hand-held bright screens and cars, when the world was slower, riding my bike into town, past the old fire station next to the park. Old, dark, and empty. I used to pretend a vampire lived in the darkness. Which was ok during the day, but walking past at night was more problematic. It would watch me through the broken glass. I was sure it knew where I lived. Just above the clouds, it might follow me home. Then, at night, scratching at my windows. Behind the curtains. A shadow. Across the road was the cemetery. It seems strange that a cemetery bordered the high street. The wooden archway and steps lead up to the church. And just inside, a stone angel. Reaching up to the heavens. In the dark, her eyes, yes, I’m sure that they used to follow me as I rode by. I never stopped to find out. Nor if her hands had moved away from the heavens, and now reached out for me, her mouth filled with teeth.

There were ghosts back then. Derelict houses stood boarded up, waiting to be demolished both in and outside of town. The old fire station was only one of them. There seemed to be so many and, in truth, the boarded doors and windows did nothing more than act as an invitation to us restless children. Creeping inside, shoes crunching shattered glass that broke the silence of the damp-smelling interior. Slowly walking up creaking old wooden stairs, and opening doors to floorless rooms – beams over open drops through ceilings. Light straining to expose hidden corners and cupboards. The attics were the best. Sometimes there were closed boxes, and sometimes old newspapers, brittle with age, told of the lives once lived by those whose feet once stepped upon carpet, and whose lips sipped tea. Did the chairs move by themselves? Did those old doors close on ancient hinges that creaked in the darkness? And when those long-dead feet fell upon the shattered glass, did they fall silently. Did they float just inches from the floors? I think they may have.

At the top of the town stood an old hotel. It was once named after the Highwayman upon whose Heath the town had expanded. The Highwayman Inn had its own ghosts. Later to change its name to the Birch Hotel in an effort to help dispel its haunted reputation. And further out of town, a crossroads. There, in the ground the remains of the Gibbet that had taken the lives of criminals. Jacob was one of the last to die there. The wood was taken away, but some found its way to the old pub along the road. The Royal Oak, locally known as Jacob’s Post. Yes, the stories were told there too, as the wood above the fireplace whispered it’s memories into the brick and mortar, and the ears of those who could hear, to tell its stories.

Then there were the open spaces. Chalky and wet, sometimes filled with household waste. The odd fridge, door open, inviting. I can still hear my mother’s voice warning me how a young boy once hid inside one, the door closing. He wasn’t found for months. I never went close to those fridges.

Now, when I occasionally return to my old home town, the place I grew up, I see the new houses that were built on that waste ground. New footpaths lay across the old chalk upon which a bomb fell during WW2, and upon which I played as a child. Others live there now, and as they walk along those new paths, eyes fixed on bright screens, barely acknowledging each other, except to pause and move out of the way. Others begin to walk with them, as the veil thins, and the ghosts walk among us once more.

12 responses to “Samhain – The Ghosts walk among us once more”