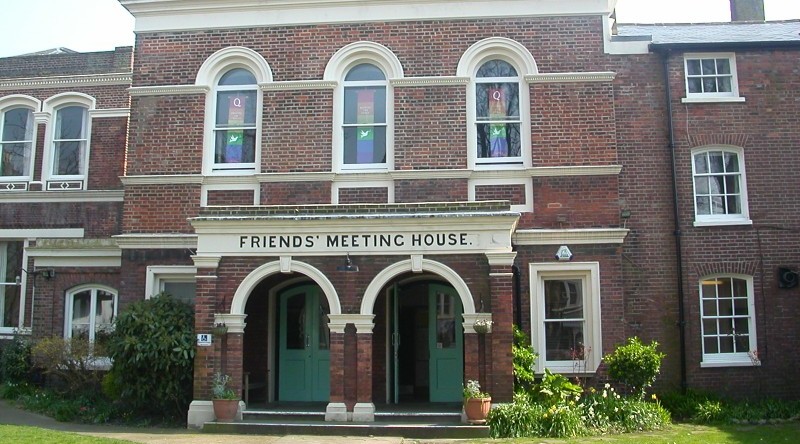 Yesterday I spoke at the Brighton Interfaith AGM. It was held at the Quaker Friends Meeting House, a venue I played a concert at many year’s ago at Brighton’s sadly defunct World Sacred Music Festival. I’ve spoken at three of their interfaith meetings and they are always warm and welcoming, and what I really love is the understanding and openness shown by the organisers, speakers and attendees. I was on a panel alongside a Unitarian, a Muslim, and a Buddhist. Each of us spoke for around 10-15 minutes about our journey into our spiritual path, and how it has changed our lives.

Back in 1995 I spoke at my first interfaith meeting that covered the same topic. The first question from the audience came my way. It was an Evangelical Christian who asked, “All of those feelings you felt that attracted you to Paganism – how do you know it wasn’t Satan who placed them there?” It shows how far Paganism has come, that this time, just over 20 years later no such ridiculous questions were asked. This time the questions came from people in the audience who obviously had more knowledge and understanding of Paganism, but were also very intrigued by it.

Here is the text from my presentation:

I was asked to speak about faith and change. How I came to choose my Pagan path, and how it has affected my life.

My earliest memory of religion was going to Sunday school as a child. We were all in the loft of the local church, learning about Jesus and I guess it must have been approaching Palm Sunday as that word Palm is very strong in my memory. It must have made an impression because when I walked out of the church the air was freezing cold, and there was snow on the ground. Even at that tender age I knew that palm trees weren’t a common plant in Britain and in that instant the religion of Christ felt deeply distant to me. Like I was learning about the stories from a land thousands of miles away, and Christ and the desert heat of the Middle East, was beyond my reach. I looked at the countryside around me, the deep green forests, the hills of the Downs, and wondered even then what stories were being told of this land.

As I ventured into school I was taught all about the history of Britain. But once more there seemed as if there was a huge gap. According to my teachers our history began with the invasion of the Romans. Well that was 43AD, so what was happening here for the thousands of years before they arrived?

I am Cornish by birth and our family went back to Cornwall for our annual holiday every year after we moved away. There I saw the stone circles, Fogous, Long Barrows and settlements of the ancient peoples of this island. People who would never have even heard the name Christ. So what did they believe? That quest turned into an obsession and, the more I learnt and the more I looked that obsession turned into my spiritual path.

I discovered that much of what I had been taught by my teachers about those ancient people had been based on the words of classical writers like Caesar, Pliny, and others, many of whom were conquering warriors who needed to raise finance for their conquests. What better way to raise that finance than to paint the people they wanted to conquer as barbarians who would benefit from the civilisation of Rome.

It became very apparent to me that the ancient Pagans of this island were not barbarians at all, but people who traded with mainland Europe, created incredible structures that are still visible on the landscape, from Stonehenge to the hill forts of Cissbury, Chantonbury and Mount Caburn, here in Sussex. A tribal peoples who had an animistic view of the world. They didn’t appear to have a creator God, but rather had spirits within the landscape itself, the land that fed them and gave them water, the land that sustained their crops, and fed their cattle. The relationship between the Sun, and the land, the seasons, and the Moon and how it affected the tides. They also believed in an unseen Otherworld where the Gods and Heroes lived. This Otherworld has many names – Tir na Nog, The Land of the Ever Young, the Summerlands, Annwn or Annwfn, many of us will know it as the realm of Faerie. But no gossamer-winged little folk these, oh no, these are powerful magical ever-living being that are also the Genus Loci of ancient sacred sites. In Wales they are called Y Telwdd Teg, in Scotland they are Bogarts, in Cornwall they are Spriggans, here in Sussex they are called Pharises, which is simply a Sussex dialect corruption of the word ‘farieses’.

As I leaned about this Otherworld and the way it interacted with our own I also realised that this was a deeply magical world and, like prayer, magic was a valid and powerful way to interact with the gods. I know. Magic sounds either dangerous or deluded, and it’s neither, but maybe that’s the topic for another day.

If I was to sum up my Paganism in one sentence it would be ‘a spiritual path that enables a closer relationship to the natural world, both seen and unseen’. And that’s how it’s changed my life.

I was brought up believing that humans were somehow special. That we were made in the image of God and that we had dominion over the earth. Over my years within Paganism I’ve realised that this doesn’t make sense to me. I’ve realised that we are just another animal. Just another species on this miracle of a planet. That humanity is one of the most dangerous predators in the natural world, and the quicker we realise that we don’t have dominion, but instead share this planet, the better. Not just for us, but for every other species that walks the earth, soars in the sky, or swims in the oceans. My Paganism gives me a language that enables that closer relationship, and once you’ve began that conversation, that dialogue with Nature, there really is no going back.

There is a legend that says we should never eat the food of the Faerie. That if we did we would be lost to this world, and never be able to return. I now wonder if that actually means once your eyes have opened to the magic and majesty of a real relationship with those worlds seen and unseen, it changes everything, and you can never go back to how things were before.

In school I learned about the Greeks and Romans. I grew up knowing the names of Zeus, Apollo, Jupiter, Aphrodite. But as my Paganism grew I discovered the names of other Gods. I learned of Rhiannon, Ceridwen, Arawn, Manawydan, Bran, Branwen, Herne, Lleu Llaw Gyffes and Pryderi. I learned of the ancient woodland hunter Goddess of the Weald known as Andred. I learned that the land speaks with poetry and story, and these voices are the voices of the Old Gods themselves. They never went away. They have always been here, and their tales are still being told around Pagan campfires, under the same canopy of stars our ancestors sat beneath, speaking those same stories, honouring the Old Ways.

12 responses to “Interfaith – Faith and Change”