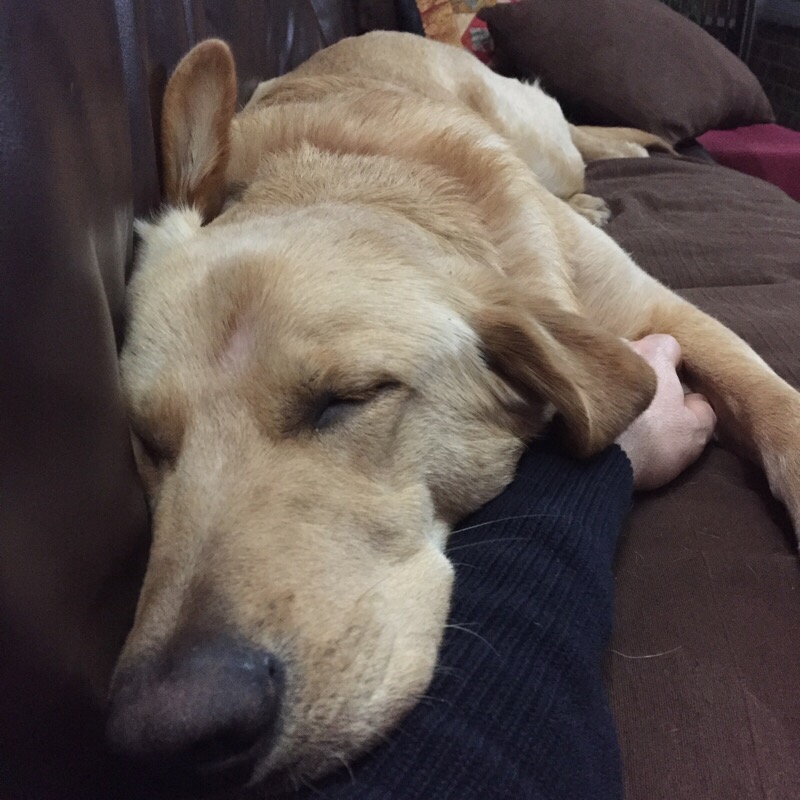 In Praise of my Dogs My Bardic name is Damh. It’s Gaelic for Stag and I have felt that deer have been my power animal for years. I love them. Their grace, their power, their associations with the Pagan Horned God. But there is another animal that I love even more than deer and that is dogs. I’m absolutely and stupidly in love with dogs.

My first dog was a Beagle. I got him when I was about 5 years old and called him Pluto (that was the only dog name I knew back then). We were the best of friends as I grew up. My bedtime was just as Coronation Street started. Pluto would hear the music and bark at me to join him at the bottom of the stairs, then we would have a race to the top. Every night was the same. It was years until I got my next dog. A Gordon Setter we called Bess. Now I loved the appearance of the Gordon Setter, but didn’t really look into the breed itself (something this particular experience taught me). Bess was amazing. Huge jowls that sprayed drool as she shook, a great big lolloping hound. She was with us for about 4 years but when our first child was born she just couldn’t handle it. This new addition crawling around the floor. She changed, and it was obvious that Zakk would end up being hurt. Families are wonderful things though and my parents had fallen in love with Bess. So she found a new home with them, and lived out her life being loved and spoilt rotten. The experience with Bess made be wary of having a dog around young children. I still loved dogs, but I didn’t want to be placed in that position again. A neighbour had bought a puppy black Cocker Spaniel called Charlie. He was, to be honest, a nightmare puppy. He destroyed their kitchen and carpets. To look at him you would think he was an angel. Then one night there was a knock on our door. Our neighbour was there. He said, “If you don’t take him he’s going down the dog’s home tomorrow.” They had gone out, and while they were away Charlie, this lovely little spaniel puppy, had chewed through a gas main, filling their house with gas. Of course I went down, and brought him home. The truth was that he needed to be with us. From the moment he walked through the door he was lovely. A little cuddly mop of a dog. I took him everywhere. He came to work with me and we walked every day and he didn’t destroy anything. Well, almost anything. He came to the woods and lay at the edge of my circle as I worked ritual. He was my little Arch Druid. A gift. After Charlie along came Wizbang, a Border Collie. During the Foot and Mouth problems many Border Collie puppies were destroyed as farmers just didn’t want to risk people bringing the disease onto their farms. We heard that a farmer’s wife, distraught that her husband was about to drown the puppies that had just been born on their farm in Cambridgeshire, had contacted a friend in Sussex, asking if they would sell them. So she had driven all of the puppies down. Hearing this a couple of other farmers did the same. We got to the farm, they open a shed door and there were all of these Border Collie pups in there. One came over, barked (as much as a puppy can bark) and did a little wee on the floor. She looked at me and that was it. She came home. We let her lose in the house and she just ran like a little maniac around the place. She gave herself her name, Wizbang.

We bought Wiz just before my music became popular, and I started to play more gigs. Subsequently she ended up spending almost as much time at my parents as she did at home. She was happy with that, and was very used to staying at the two locations.

After she died I didn’t want another dog. She left such a huge hole that I couldn’t see how it could be filled, plus we were so busy it didn’t seem fair. A year ago, however, just after the AnderidaFest of 2014, Cerri looked on the Friday Ad website. There were a litter of ‘Shepradors’ – German Shepherd/Labrador crosses in Horsham. Something about the picture made me pick up the phone. They had one boy left. If I was to get another dog I really wanted another boy this time. We went and had a look, and Oscar came home with us. He’s on the sofa beside me now.

It took a little while to bond with him. He was a difficult puppy, and in truth I wasn’t completely over the death of Wiz. So on one walk I sat down on a bench and apologised to him. Saying that I was expecting too much from a little puppy and that it wasn’t his fault. I just needed to grieve a bit more for my last dog. He sniffed around. I stood up and walked on, and now I couldn’t be without him.

I play less gigs, he loves other dogs so enjoys the occasional stay in kennels, and on the whole he is with us most of the time. He’s incredibly social so comes most places with us. He’s my pal.

There is nothing like being greeted by a dog. Be that in the morning, or coming home. The enthusiasm, love and excitement, no matter what kind of day I’ve had, is overwhelming. They need exercise, so rain or shine Oscar gets me out of the house. Over the course of the past year he has become an integral part of the family.

I saw a poster on Facebook just after Wiz died that broke me up. It had the face of a dog and it said, “You will have lots of dogs during your life, but you will be my only humans.” Dogs are a gift. They have learnt to be with us over millennia. They are loyal companions. I cannot ever imagine living in a house without one.

My name is Damh, it’s Gaelic for Stag. Deer are my spirit animals. But I think inside I’m probably a dog.