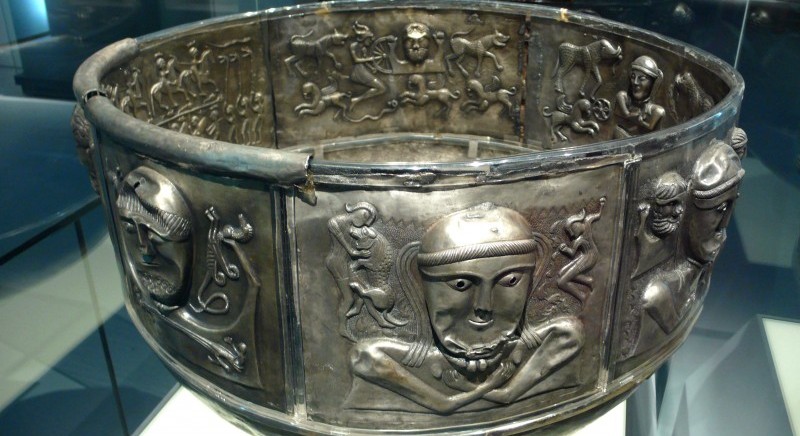 The British Museum is currently running an exhibition that I know will be of interest to readers of my blog. It’s called Celts: Art and Identity and last Thursday me, Cerri and about 20 other Druids were given a private tour after closing time. We were met by the curator of the exhibition who explained the concept behind the exhibition. The exhibits span from 1500BC right up to the modern day.

She began by explaining the journey of the name Celt and that it originally was used by the Greeks and Romans to describe tribes from the region of the source of the Danude and Iberia. The classical writers never called the tribes of the British Isles Celts. We were from Albion, or Prettanic Isles, or Hibernia. Although Tacitus did observe similarities between those of Albion and Gaul. After the Roman period, for over 1000 years the name Celt fell out of use. It was only in the 17th and 18th centuries that scholars, led by the classical writers whose books were discovered in monasteries during the Renaissance, began to try and understand a pre-historic Europe. They surmised that a Europe-wide invasion/cultural spread happened that linked the tribes of northern Europe by language and art. This then led to the connection of the Welsh, Cornish, Scottish, Irish and Breton languages, and that these must be the remnants of the original language of these vast Celtic tribes. These cultural associations with the term Celtic have become very important to some people who live within these areas. But we now know that the history that we have inherited isn’t really based on fact but rather on connecting tenuous threads to create a rather patchwork tapestry that needs a lot of extra sewing to tie it all together.

That being said the exhibition deals with these complications with incredible sensitivity, and rightly so. It’s name suggests the journey – Celts: Art and Identity – and from the moment we stepped into the exhibition we were taken on a 2500 year route that showed how the name Celtic has changed, and how it developed into what we now understand. There are some iconic pieces to see. The Glauberg statue, a vast collection of torcs, a Carnyx, chariots, ritual objects, swords, bowls and shields. But there was one object that I was ridiculously excited to see, and that was the legendary Gundestrup Cauldron. Its first time in the UK and such an iconic symbol of the Druid path. As I made my way through the exhibits I could see the Cauldron ahead, but delayed just heading straight for it. The Carnyx (a battle horn with a boar’s head) made me very emotional. They have listening phones that are playing the sound of the instrument. It’s not hard to understand how this would scare the enemy if hundreds of these horns were being blown. Maybe that is the route of ‘putting the wind up’ your opponents comes from? I don’t know, but it makes sense.

But the star of the show for me was the Cauldron. It was a lot bigger than I thought it would be. Beautifully decorated both inside and out. The inner frames showing scenes such as warriors being placed in a cauldron (echoes of Bran’s Cauldron from the Mabinogion?), and the iconic horned figure with torc and serpent. I stood before it for ages, and I wonder how close, and for how long people who aren’t lucky enough to get a private viewing can stand there, so close, and admire every aspect of it. I hope the power of the Gundestrup Cauldron can still be heard through the crowds that normally fill that hall.

As we walked further on we travelled from those mystical ancient days, right up to the modern day. So along with the iconic Gundestrup Cauldron, torcs, and chariots from pre-history, we were also blessed to see the Bardic Chair, ceremonial regalia and sword from the Welsh National Eisteddfod. There is original art such as De Loutherbourg’s The Bard, but nothing prepared me for the final exhibit and paragraph.There, in a beautiful glass display were cards from the Druid Animal Oracle and the DruidCraft Tarot. The last paragraph on the wall spoke of how Celtic identity was being expressed right now, and one of those expressions was through spirituality like modern Druidry, which it said was one of the fastest growing spiritualities in both the British Isles, and the USA. It made me very happy that our path was being acknowledged by such a powerful institution such as the British Museum.

There’s so much more, so if you can get to see it please make the journey. It is highly unlikely that such a collection will be brought together again in our lifetime. It’s on at the British Museum until 31st January, and then it moves on to Edinburgh until September. 11 responses to “Celts: Art and Identity”