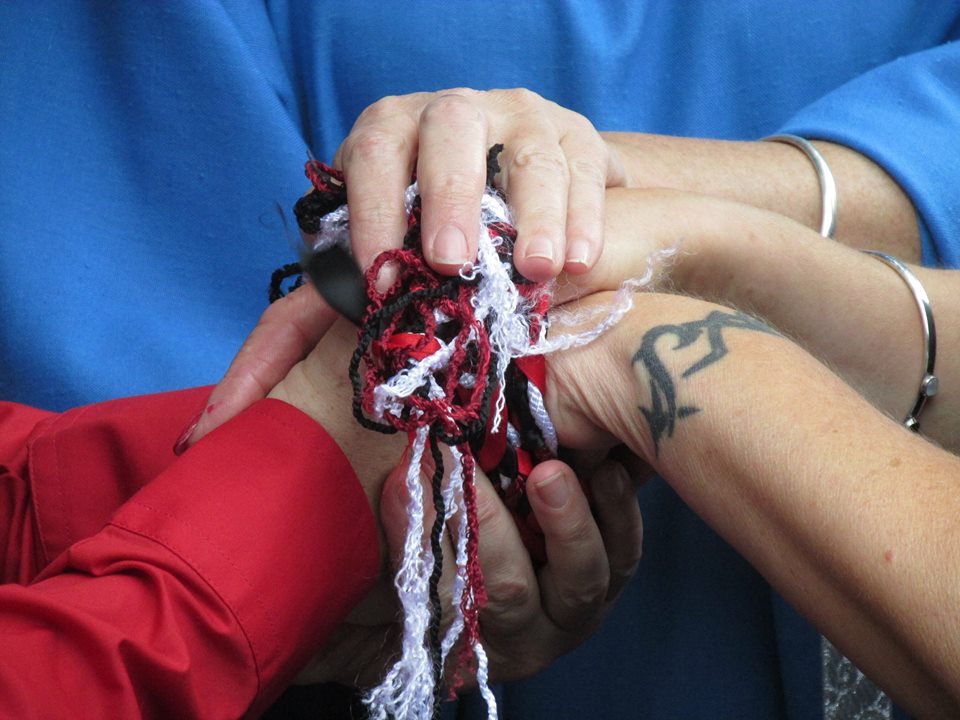 Celebrancy – A role whose time has come In 2010 I travelled to the USA and went to the Pagan Spirit Gathering for the first time. PSG is organised by Circle Sanctuary and is a 7 day camp during which they literally set up a Pagan village. The overriding theme and feel of the camp is community. The camp was in Missouri that year at a place called Camp Zoe, an awesome venue in the foothills of the Ozarks, but man, that humidity. At a morning meeting under the shelter of a huge tree Selena Fox said that the next day would be 90 degrees with 100% humidity. I remember thinking 100% humidity… that’s just water right? I’m going to step outside my hut tomorrow and just drown. It was unbelievable. The only sensible place to be was naked in the creek in the valley, so that’s what I did most of that day. Man, those crawfish can nip!

What I came away with from PSG was the sense of community.

Okay, I’ll admit, when we get together at events that’s when the Pagan community is at its most obvious. We don’t tend to be very good at a distance. It’s not a good idea to take the temperature of a worldwide community by the way it behaves on social media. It was the same when we hung out on message boards, and on emails lists and newsgroups before that. But when we get together we create magic, and I saw plenty of magic at PSG.

When I got back I thought how can we bring more of that into the community outside of events like PSG? I realised that for some of the specialised aspects the Order of Bards Ovates and Druids was perfectly placed to help bring those things about. So I spoke to Philip and one of the results was a new OBOD website. The old site’s focus was on the OBOD course (and that still is the backbone of the Order) but the new website added to that. If you go to the OBOD website now you will see that the first three button links on the top of the page are: ABOUT US – THE DRUID WAY – COMMUNITY. The fourth button is the JOIN button. By 2010 OBOD already had around 15,000 members. It made sense to shift focus a little.

Let’s just check in on this thing called community.

This week I once more read a few posts on Facebook deriding the Pagan community. A fair number of comments agreeing that there isn’t one, that it’s broken, that it’s fake etc etc. How about a reality check. Paganism is young. Really young. We are only just losing people who founded large parts of it. It’s natural to want everything to be perfect and right instantly, but that just isn’t realistic. It takes time, effort, and patience. It’s like expecting your two year old to be polite and grown up. Encourage it, and it will grow up to be just that, but keep shouting at it, walking away, complaining to everyone about it, and it simply won’t grow. I saw a sign some years ago saying, “You aren’t stuck in traffic, you are traffic.” I feel the same about the Pagan community. We aren’t outside looking in, we are all it, and growth can only happen with small changes from within. I very much doubt we will see things come to fruition within this lifetime, but what we are doing now is laying foundations that future people can build on, or change, as they see fit. In reality that’s about the best we can achieve right now.

One of the things that brings a community together are rites of passage. Secular hatch, match and dispatch rituals doubtlessly bring families together but for many years now it’s become obvious that the deeper spiritual aspects are harder to connect with. For many they are simply things we do because, well, that’s what you do. But still, to conduct a wedding, Christening or funeral takes experience, empathy and learning. Outside of the recognised legal rites conducted by Christian Priests (which are perfect if that is your faith) and trained local authority registrars (that are ok, but somehow lacking something) there is the place of the celebrant.

The Pagan community has been holding rites of passage for years. Some of these are conducted by experienced ritualists, some are conducted by friends of the other people involved. I’ve been to many. Most have been wonderful, a few not so, a couple, well, a disaster. The success or otherwise of the rite has always been in the hands of the celebrant. The ones that have worked? The celebrant has work for the people involved. They have met with them, discussed their needs, what they want, what they don’t want. They have worked with the people during the entire process, and on the day they have held the ritual gently, but with full awareness, stepping out of the way and remembering that the ritual is not about them, but about the people there.

To be a celebrant is a hugely important role and it’s not for everyone. Me and Cerri have held open rituals at the Long Man of Wilmington for the 8 seasonal festivals for 17 years, rain, snow or sunshine and I still love it. However, I’ve conducted a few rites of passages and I realised very quickly that it wasn’t for me. But there are many within our community that love them, that see these as their offerings of service. But as I’ve said, these rituals are important, really important, too important to just wing and make up as we go along. If we are, as a community, going to grow, it makes sense to take the role of celebrant seriously. And that is what the OBOD have done.

For the past couple of years the Order has been holding annual celebrant training retreats. During these times people have learned the skills involved in working with people, helping them create powerful ceremonies, working with the bereaved and helping to lead them towards saying goodbye to a loved one, how to hold the energy of a ritual safely, and gently, and all of the other aspects of this important role that our community now needs. They have done this with Order member, and full time celebrant, River Jones. But it quickly became obvious that this was something more people wanted than could be fitted on the residential courses. So earlier this year River and the OBOD began to put the courses online. The first course Serving the Living and the Dead was published earlier in the year. The second course Celebrating Life was published just last week. Between the two courses the student celebrant learns all of the skills necessary to serve the community and beyond. Throughout the whole process River is there to help guide when necessary.

As I said, being a celebrant is not for everyone, but if you think it’s your path, you can find the online courses at www.schoolofcelebrancy.com.

The Pagan community is growing. It is fragile and beautiful. It is inspiring and frustrating. But these little steps are what is going to make the difference in the long run. Rites of Passage are important to a growing movement, they need to be treated as such. Circle Sanctuary inspired me at PSG. That 7 day Pagan village of just over 1000 people moved me. It gave me a glimpse of how things could be one day. I love the worldwide Pagan community. I see a lot of it and, although it is far from perfect, it is ours. Is it gong to screw up? Of course it is. Is it going to annoy us? You bet. As we grow older as a community, will there be experienced people there who can help us with our rites, and moving on? I hope so. None of us are getting any younger.

5 responses to “Celebrancy – A role whose time has come”